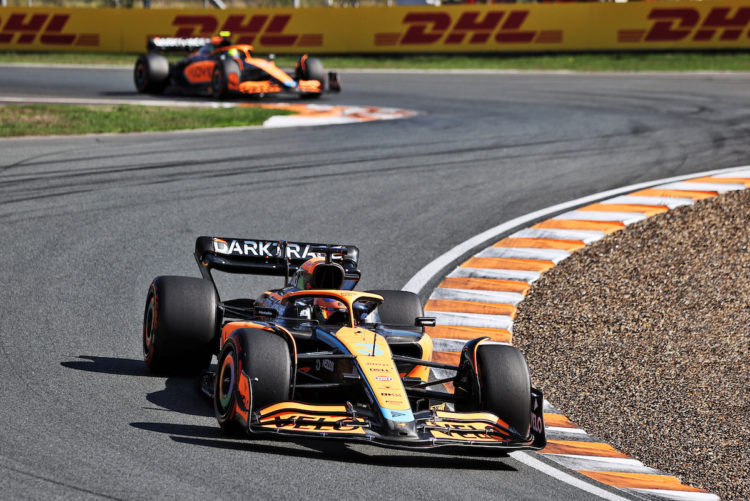 Daniel Ricciardo says that a dirty track surface resulted in his early exit from qualifying on Saturday from Zandvoort.

Ricciardo ended the session in 18th place, before he was promoted up one spot when Haas’ Kevin Magnussen had his lap time deleted.

It marked another disappointing result for the Australian driver ahead of his pending departure from the McLaren team at the end of the 2022 campaign.

However, Ricciardo believes that had he not came into contact with the dirt, he would’ve progressed into Q2.

“I guess whoever in front of me was, they put a wheel in the dirt or something,” Ricciardo said.

“I pulled out of the chicane, corkscrew, whatever and I was looking up to the next apex. I could see brown all over the track, a lot of dirt.

“I was hoping that it wouldn’t affect the grip but it did and it cost me about three-tenths I think. That was the difference putting me out in Q1.

“The lap was OK, it wasn’t electrifying, but it was definitely enough to keep going in quali. I think it was probably a couple tenths to find.

“I don’t think it was tracking to be too bad, especially compared to this morning, we were pretty lost in FP3, scratching our heads. It was trending like it was better but one of those ones where you can’t do much.”

“That’s why I try not to get excited on any Friday. It’s so hard to know this year,” Ricciardo said.

“I feel like if we do have a good Friday, we’re always expecting the others to make a step. In saying that, we’re not a Q1. I think it was unfortunate circumstances.”

Norris ended qualifying ahead of the Dutch GP in seventh place.