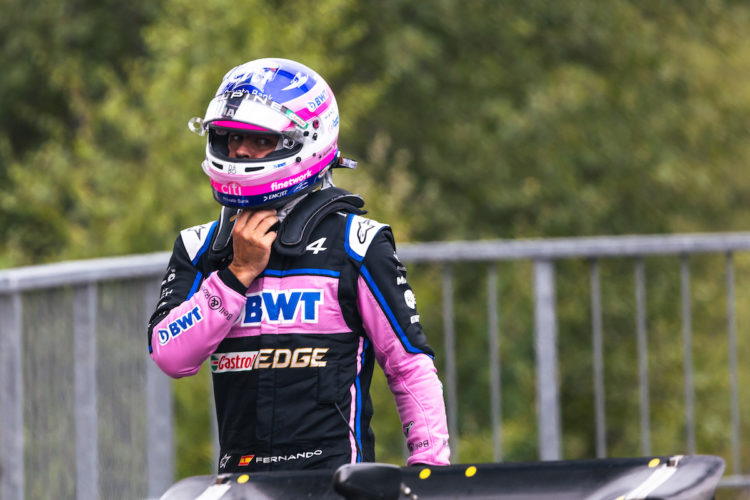 The duo collided on the opening lap of the race, with Hamilton forced to retire as a result.

The seven-time World Champion accepted blame for the incident, but was criticised over team radio by Alonso.

The Alpine driver claimed that Hamilton “only knows how to drive and start in first”.

Writing in his post-weekend column for Sky Sports, Brundle hit back at the comments, believing that Hamilton is one of the cleanest racers in F1 history.

“Lewis said he couldn’t see Fernando in his blind spot but frankly he was bound to be there somewhere, and the Spaniard tried his best to stay to the inside and give space,” he said.

“Lewis saw the footage and immediately put his hand up and correctly accepted full responsibility.

“Fernando’s radio comments, albeit fuelled by anger and adrenaline, about Lewis only being able to win from the front were in my opinion wholly inaccurate and unfair.

“Lewis is one of the fairest and cleanest drivers in the history of F1, he hasn’t needed to resort to too many professional fouls given his relentless speed, and just cast your mind back to Brazil last year to remember how he can scythe through the field. Twice.

“That error of judgement will have caught Lewis’s attention.”

Alonso went on to take fifth place at the end of the race, benefitting from a penalty for Charles Leclerc, who was found guilty of speeding in the pit lane.

Leclerc’s penalty capped off a difficult race weekend for Ferrari, in which one again they came under criticism for strategy calls.

“Ferrari claim they need to change nothing on the pit wall calls but if you keep doing the same thing don’t be surprised when you get the same result,” Brundle said.

“Fully respecting that we only hear selected radio calls on the TV, but the Ferrari team appears to want Leclerc to make the final decisions on tyres when he doesn’t have the full set of data because he’s rather busy driving.

“He can’t possibly make the final call on the hard compound tyre without knowing who’s already using them, if anybody, and how they are performing.

“Leclerc is now third in the championship and 98 points behind, with eight races to go. All things being equal, I think we all know which way this championship is heading.”