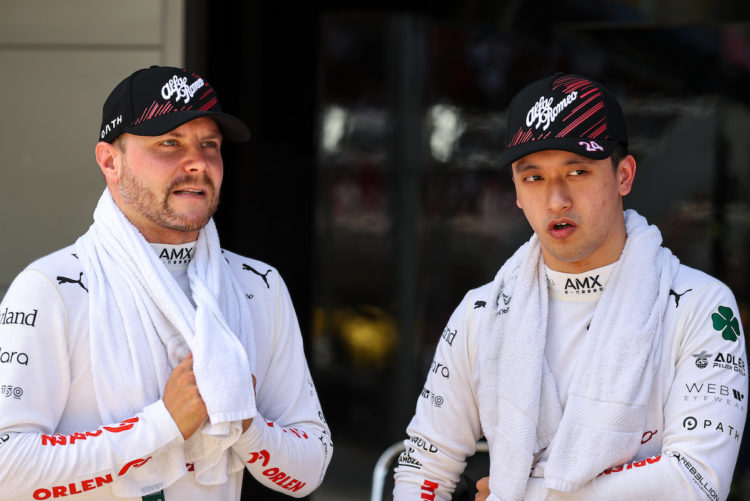 Valtteri Bottas has voiced his support for Zhou Guanyu regarding a drive at Alfa Romeo for the 2023 Formula 1 season.

Bottas is signed to the team on a multi-year deal, however his team-mate for next year is not yet confirmed.

Zhou joined Alfa Romeo this season after spending three years in Formula 2, becoming the first ever F1 driver from China.

The 23-year-old scored his first championship point at the season-opening grand prix in Bahrain, and achieved his best result to date in Canada earlier this year, crossing the line in eighth.

There are several drivers on the market for next year, including Daniel Ricciardo and Mick Schumacher – however Bottas says that Zhou would be a strong fit for the team.

“I think Zhou has been a good fit for the team, and at this moment I don’t see any reason why he shouldn’t be allowed to continue.

“I would definitively root for his continuity as this is only his first year and, for sure, he can make a good step for the second year.

“That’s my feeling, I don’t think he’s stressing too much about it, he’s just keen to get this triple-header down, get some good points and maybe then, potentially, it’s going to be time for him to sit down with the team.”

Alfa Romeo will depart F1 at the end of the 2023 season, ahead of Audi’s expected takeover of the Sauber-run team in 2026.

Despite Audi’s entry being several years away, Bottas says that he is open to remaining part of the Hinwil-based outfit up until and after the German manufacturer’s F1 debut.

“At this moment what I feel is ‘why not?’. I’m really enjoying it, I still feel I can drive fast and in the future I don’t see a reason why not,” Bottas said.

“I still feel I’ve got lots to give to the sport and for my personal future, if the feeling remains, then why not?

“Obviously you never know how you’ll feel in two or three years’ time, but now I’m really enjoying Formula 1, how high the sport is at this moment, the atmosphere at every weekend is great.

“I’m in a nice team and the work-life balance is really great for me at the moment, so I can see myself staying for that long.”