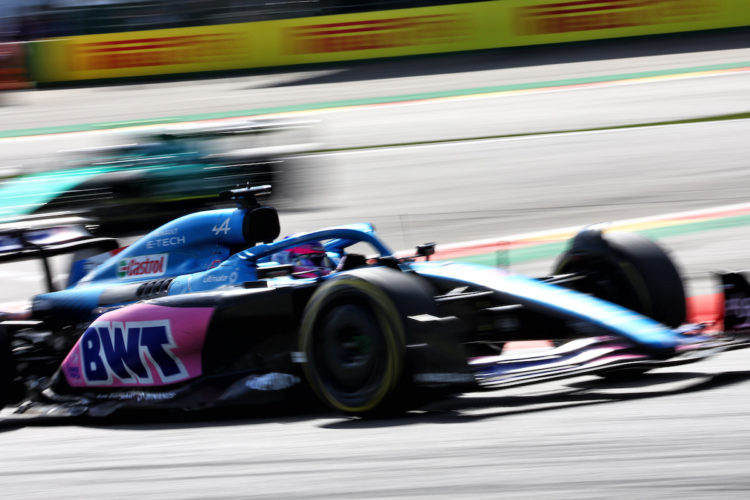 Fernando Alonso says he was surprised to see Charles Leclerc emerge in front of him in the latter stage of the Belgian Grand Prix when Ferrari opted to make a late pit stop.

The Maranello-based squad fitted Leclerc with fresh Soft tyres in an attempt to take the extra point on offer for the fastest lap.

Leclerc dropped behind Alonso but managed to overtake the Spaniard again on the last lap – however he failed to set the fastest time, which was retained by race-winner Max Verstappen.

To add insult to injury, the Stewards found that Leclerc had sped in the in pit lane during the tyre change procedure, and a five-second time penalty dropped the Monegasque driver back to sixth.

It promoted Alonso up one spot, who admitted surprise over the situation: “I was surprised, Ferrari always does some strange strategies so, that was one of those!”

Alonso’s race almost came undone on the opening lap, when he was involved in a collision with Mercedes’ Lewis Hamilton.

The pair were fighting over second place, with Hamilton attempting to overtake around the outside of Les Combes.

However, contact was made and Hamilton was pitched into the air before crashing back down, suffering terminal damage to his W13 Mercedes car.

The seven-time World Champion accepted blame for the incident, which Alonso was thankful for.

“For sure, he now saw the incident and he takes the responsibility which is obviously very nice from him,” Alonso said. “It was a lap one incident, nothing really to say there.

“The stewards, they didn’t say anything. These things happen, especially in that corner. It happened with Lewis and [Nico] Rosberg [in 2014], the same thing.

“It’s a tricky corner. I was frustrated in that moment, for sure,” he added, referencing his team radio outburst in which he called Hamilton an “idiot”.

“Every time we start on the first or second row or we’re fighting top two, top three, there is something going on.

“It was frustrating but luckily my car was very strong, nothing happened and I could continue. Lewis was not that lucky and he had to retire the car.”