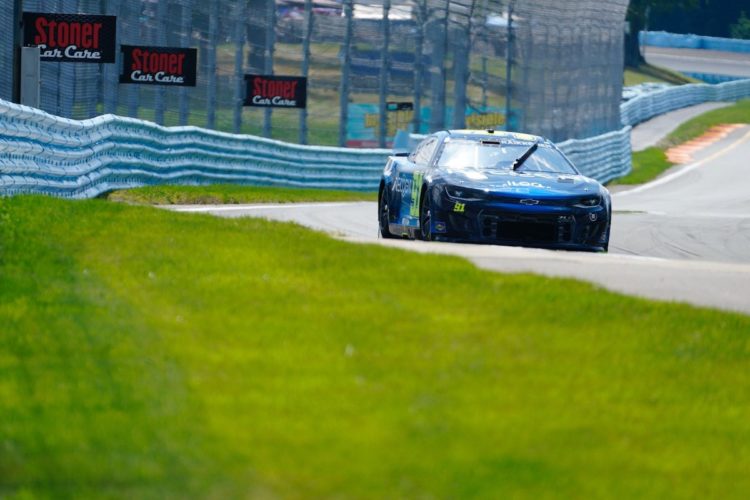 Kimi Raikkonen ventured into a new arena last weekend, as he made his debut in the NASCAR Cup Series with Trackhouse Racing.

The 2007 Formula 1 World Champion has previous experience in NASCAR, but the other entries, which occurred over 10 years ago, took place in the Xfinity and Camping World Truck Series.

His Cup Series debut came at Watkins Glen, a fan favourite of many drivers.

Raikkonen was offered some practice laps in Virginia prior to the weekend, as he came to grips with the new-for-2022 Next Gen car.

Raikkonen’s race was progressing well, and he was running inside the top 10 after the first stage before making a pit stop.

Unfortunately for Raikkonen, his race came to an end with a crash into the barriers as he was caught up in a multi-car incident midway through the event.

“I had a good line there but everybody seemed to come to the left, unfortunately,” Räikkonen told NBC Sports.

“I had no time to react. The first impact, somebody hit the tyre or the wheel and the wheel spun and something’s wrong with the wrist, but that’s how it goes.”

Darian Grubb, crew chief of Raikkonen’s No. 91 entry, hailed the 42-year-old for commitment to the weekend.

“It was amazing,” Grubb told Nascar.com. “He worked so hard trying to get ready for this. It’s really disappointing to end that way.

“The way the strategy scenario was working, I think he was going to have a good chance to go race hard with guys.

“He had good tyres and able to race his way up, he was able to make some passes and stuff already. And I think we had a good shot to be up in the top 10, which is what our goals were for the weekend.

“So disappointing end, but he did an amazing job all week preparing for it, coming in and ready to go.”