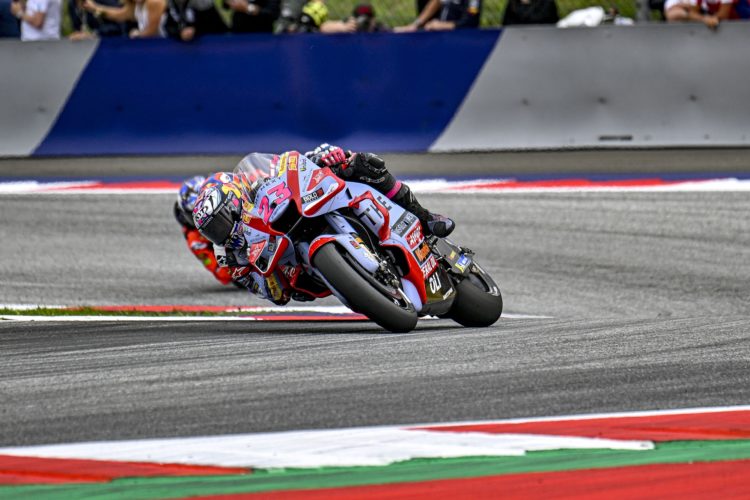 A broken front wheel was the primary cause of Enea Bastianini’s early retirement from the Austrian Grand Prix, the Italian having entered Sunday as the favourite for victory.

The Gresini Ducati pilot flew to a maiden MotoGP pole position on Saturday having also led the way in the preceding FP4 session, leaving him as the smart money tip for a fourth win of 2022, though his job was made all the harder after losing the lead to eventual race winner Francesco Bagnaia on the run to Turn 1.

Disaster would soon curtail any hopes he had to chase the factory Ducati pilot down as he clipped the aggressive kerb on the outside of Turn 9 hard with the front wheel after losing the rear of his Desmosedici mid-way through the bend, the resulting collision causing serious damage to the front wheel rim.

This in turn caused the front tyre to begin losing pressure, causing him to lose positions to Jack Miller, Pramac’s Jorge Martin and Yamaha’s Fabio Quartararo in quick succession before his race ended for good after running straight on through the gravel at Turn 4, forcing him to return to the pits and retire.

Bastianini is convinced that “it was definitely possible to battle for the podium” given his usual late-race speed, but accepts there “was nothing we could do” with the situation he was faced with.

“I’m not happy about this but there was nothing we could do today because between Turns 9 and 10 I lost the rear a bit and the front wheel hit the kerb, which broke the wheel,” explained Bastianini.

“The (tyre) pressure went down and it was then impossible for me to finish the race.

“It was definitely possible for me to battle for the podium, but we will try again next time.”

Bastianini managed to squeeze in an exciting tussle with Martin prior to his early bath, the Spaniard his chief rival for the second factory Ducati berth alongside Bagnaia for next year.

The 2020 Moto2 world champion reckoned that Martin was riding in a particularly “aggressive” manner with him, though reckoned that “this is normal” given the situation.

“I battled a lot with Jorge (Martin), it was very competitive and he was very aggressive with me but we know this is normal,” added Bastianini. “I don’t know what the future holds, it (factory Ducati decision) could be before or later than Misano but we have to continue with each grand prix.”