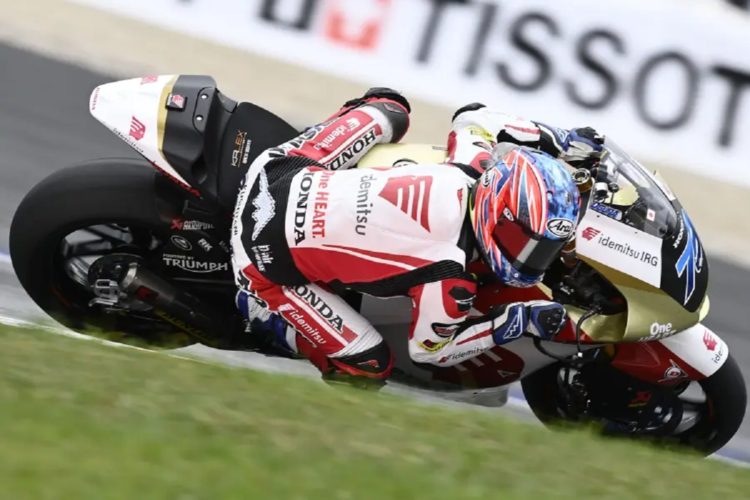 Ogura made a strong start from pole to hold the lead across the opening tour, though Speed Up’s Alonso Lopez soon took away the leadership towards the end of the second lap.

The Spaniard was having to work hard to maintain the lead though and quickly made a mistake at Turn 3 to let Ogura back through, while Chantra swiftly made it a Honda Team Asia 1-2 with an aggressive move on Lopez at Turn 4.

From this point on Ogura and Chantra – as well as a flying Vietti once he also took an advantage of a mistake from Lopez top take third – began to gap the rest of the field, though the trio would become a twosome after Vietti tucked the front of his VR46-run machine at Turn 3 in the closing stages, the Italian looking to pass Chantra for second at the time.

This left the Indonesian rider a straight run at his team-mate over the remaining half-dozen laps, and having shadowed Ogura he finally made the move for the lead at the penultimate bend on the final circulation, though he ran wide and allowed Ogura to scythe back ahead.

This proved to be the decisive move as Ogura flew across the line to take victory by just 0.173s over Chantra to take the squad’s first 1-2 of the year by over eight second over the scrap for third.

Jake Dixon meanwhile was able to complete the rostrum after a thrilling battle of his own with the returning Pedro Acosta over the final lap, the GasGas man initially making an unsuccessful move at Turn 5 before ultimately making a pass stick at the final bend, the Brit notching up his third straight podium as a result.

Acosta therefore had to make do with fourth ahead of KTM Ajo team-mate Augusto Fernandez, who got the better of a fading Aron Canet across the closing stanza.

Lopez ending up taking seventh after dropping away from the leading group towards the end, while Intact GP’s Marcel Schrotter led home the second GasGas entry of Albert Arenas and team-mate Jeremy Alcoba to complete the top ten.

Lorenzo Dalla Porta looked well-set to score a strong ninth having dropped as far as 16th following a poor start, though the Italtrans rider’s race was ended after seemingly making an error at the exit of Turn 3, leaving Marc VDS’ Tony Arbolino nowhere to go but into the rear of the Italian.

The collision took both pilots out of the contest, their respective machines left strewn across the track as a result.

Ogura’s win sees him take the series lead away from Fernandez by a just a single point, with Vietti’s crash keeping him third but now a stout 27 markers down on Ogura heading to Misano next time out.