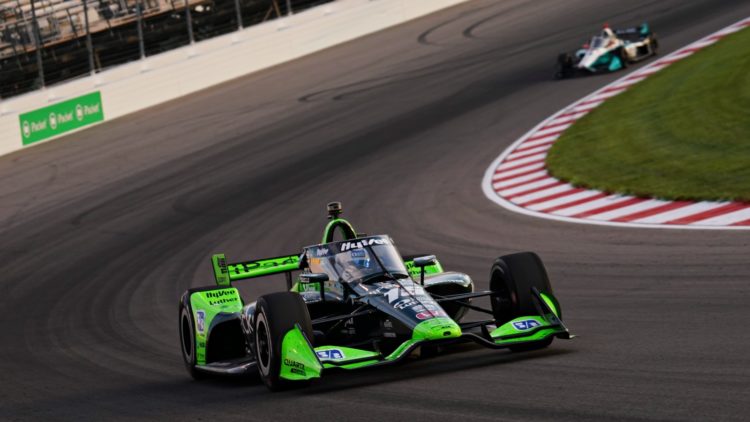 A long day of IndyCar came to a close here in St. Louis with a hectic last 10 minutes of second practice at Worldwide Technology Raceway. The last session of the day was preceded by a 30-minute-high line focus practice, like the one utilized at the Texas Motor Speedway earlier in the year to get rubber on the top part of the corners in an effort to improve racing.

Every team except AJ Foyt Racing put a driver on track for the session and right off the bat we saw improvement. The first part of the full field practice season was topped by Alexander Rossi and Takuma Sato, both participated in the high line practice.

The conditions seen on track mirrored that to which we will race in tomorrow with an ambient temperature of 84 degrees and track temperature of 99 degrees as the sun set on the racetrack.

Speeds were slower than what we saw in this afternoon’s qualifying session with the fastest speed in the season being 177.728 set by Graham Rahal, five MPH slower than Will Powers pole speed of 182.727. But the more representative conditions allowed for a racier and more productive session for a lot of teams.

Some stand-outs on the scoring sheet are the Dale Coyne Racing cars, both of which slotted in the top 10, David Malukas in P3 and Takuma Sato in P7. Team Penske shook out much slower than they did earlier in the day, with Josef Newgarden being the highest finishing Penske car in P7.

Three of the four Ganassi cars slotted in the top six, with Scott Dixon netting a P2 finish and a 177.459 lap speed. Jimmie Johnson once again found himself at the back of the pack, finishing 22 with a 173.385 lap speed. His day ended backwards in pit lane after spinning while entering the pits near the end of the session.

The only other incident in the session came when Christian Lunddgard kissed the wall coming out of turn 4. The Danish rookie maintained control of his car and bright it back to pit lane with only minor scrapes on the side pods and floor boards.

Felix Rosenqvist came out worst today after a spin in Qualifying sent him to the back of the field he looked to gather some good data in the final practice sessions. Unfortunately the Swedish driver was forced back behind the wall after an undisclosed mechanical issue bright their session to the end about 30 minutes into the hour-long session.

In the most accurate session to race conditions, the Honda cars came out on top occupying all but one of the top 10 spots. Despite his dominate qualifying performance, Will Power will not have an easy time holding back a charging field, any of which could take the top spot of the podium come race end tomorrow.