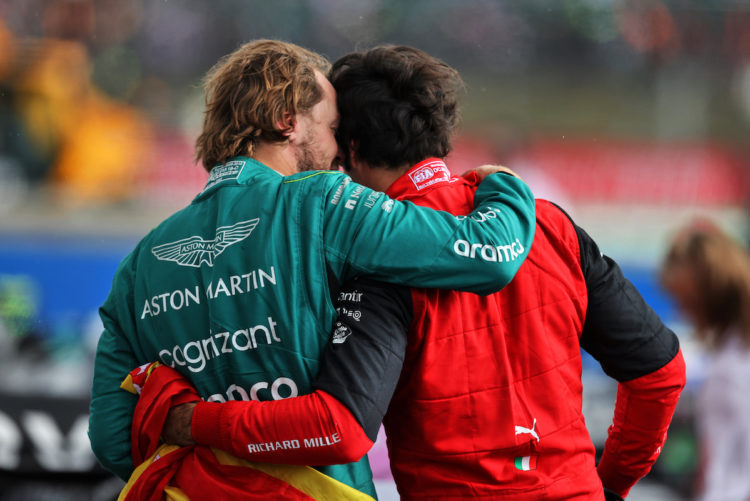 Carlos Sainz says he hopes Sebastian Vettel remains vocal over certain issues following his retirement from Formula 1 at the end of the year.

Last month, the four-time World Champion confirmed that he would depart the sport when his current deal with Aston Martin expires.

Vettel has spent the last handful of seasons competing in the midfield pack, however it was during his Red Bull days in the early 2010s where he found the bulk of his success.

Sainz hailed the impact that Vettel has had on his career, as the Spaniard was part of the Red Bull junior programme during Vettel’s championship-winning years.

“First of all, wish him all the best now, in the future that he has ahead that I’m sure he’s going to enjoy a lot with kids and family,” Sainz said.

“For me he was, since the beginning, since even before arriving to Formula 1, a great role model. I was privileged enough to be a simulator driver when he was at his peak in Red Bull, winning the Championships.

“I could see how professional he was, and it gave me a very good insight into it how you need to behave, or how do you need to be, to be a successful Formula 1 driver like he was.

“I remember those years very well. He always had kind words for me, stop and have a chat with me, and give me some advice.

“He’s a great role model as these guys have said already, and he’s an ambassador for the sport, but not only for sport but I think also for a younger generation that is coming through, and a type of career that you would look up to.

“Always getting on well with all the teams, with everyone. Everyone in the paddock loves him. You will not hear someone speaking bad about Seb.”

In recent years, Vettel has been outspoken on matters such as environmental issues, while also showing support for the LGBTQ community – something that Sainz hopes he will continue.

“I think this year speaks about his personality. He’s alive as a human being, not only as a driver, and I think we will miss him,” Sainz said.

“But I hope that we can see him back in the paddock also helping the sport to develop in certain areas that I think he’s very vocal about recently.

“And I hope that he can keep giving us a hand in that in that side.”