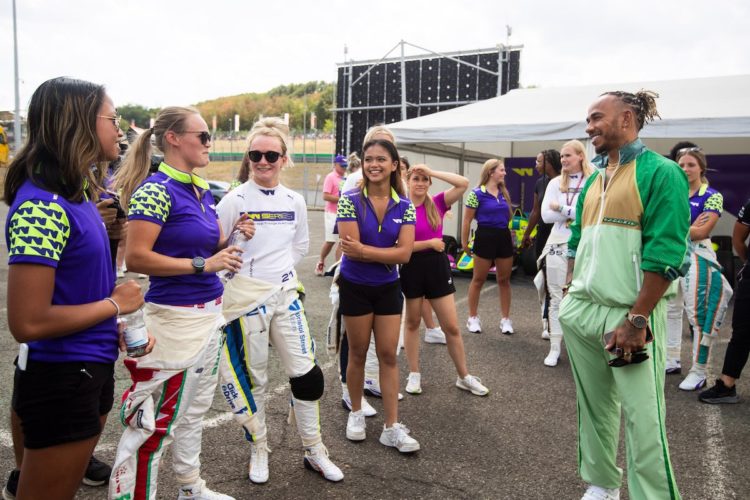 In 2019, W Series was launched as an all-female single-seater series to provide more opportunities to female drivers.

Currently in its third season, Jamie Chadwick is en route to score another title in the category, having triumphed in the previous two campaigns.

During the Hungarian Grand Prix weekend, Hamilton ventured to the W Series paddock to speak to the W Series drivers, stating that he has been following the series for a number of years.

However, he feels more can be done to help the drivers progress forward in their career after W Series.

“I’ve been following the W Series all year and the last few years, and I wanted to try to get down there and to try to see the young, inspirational women there,” Hamilton said.

“I’ve been watching their races in-between sessions, and even today, I watched their race [in Hungary] so I really wanted to go down there.

“For them, I really feel it is great that we have the W Series, but we as a sport need to do way more for young girls getting into the sport and for these women, if there is no progression from there, from W Series.

“It has been three years, so we need to really work on trying to create something. When you win that, do you progress into GP2 [F2] or whatever it may be?

“We can definitely do a lot more to support those girls.”

Chadwick currently boasts a mammoth 75-point lead in the Drivers’ standings with four rounds remaining over Alice Powell and Beitske Visser, who both have 68 points to their name.

Last time out in Hungary, Powell won the race, marking the first time this season that anyone but Chadwick took to the top step of the podium.