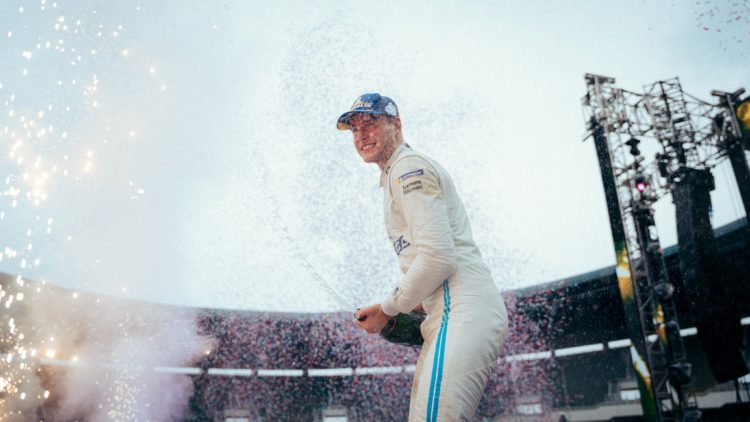 Edoardo Mortara took his fourth win of the season in Seoul, capping off the season with a race victory – but it still wasn’t enough for to beat an incredibly consistent Stoffel Vandoorne to the World Championship.

Mercedes EQ sealed a double World Championship in their last Formula E race, while Vandoorne seized the title with a run to second place behind a dominant Mortara.

Rain was forecasted to fall in the afternoon, but the track stayed dry for the entire duration of Round 16 of the Hana Bank Seoul E-Prix.

Vandoorne had a relatively quiet race, avoiding unnecessary risks right from the start. His main championship rival, Jaguar’s Mitch Evans, was starting behind in P13 after a disappointing Qualifying – and was never a threat to Vandoorne during the race, despite managing to recover to a strong 7th place finish.

Vandoorne crossed the line in third place but was promoted to second due to a time penalty for Jake Dennis.

Mortara missed out on pole position in the Duels Final against Antonio Felix Da Costa, but he was able to snatch the lead of the race on the third lap with a switchback in Turn 22 on the DS Techeetah driver.

From there, the Swiss-Italian driver managed the gap to his rivals and his energy brilliantly, helping Venturi secure second place in the Teams’ Championship ahead of DS Techeetah – and defending his own third position in the standings against Jean-Eric Vergne, who ended the race in P6.

Da Costa was running in third place up until he made contact with Dennis when he tried to overtake the Andretti driver for P2; this resulted in Da Costa falling to the back of the grid, and a five-second time penalty for Dennis.

This wasn’t the only incident in the race; Pascal Wehrlein had managed to get up to 10th after making up five positions, only to end his race at Turn 4 after making contact with Nyck de Vries.

Technical issues and debris left on track also caused a few other retirements. Dan Ticktum – who was running in the top 6 – had to drive into the pits at the end of Lap 3. Lucas Di Grassi suffered a puncture which put him out of contention for points – and ended Venturi’s chances of winning the Teams’ title ahead of Mercedes EQ.

Maximilian Guenther’s Nissan e.dams came to a halt with a problem, causing the intervention of the Safety Car with 22 minutes to go. The interruption brought the field closer together, but it also nullified Evans’ second and last Attack Mode.

Most drivers jumped for their second boost at the restart in order both to attack and defend, with overtaking made very difficult by the narrow and twisty nature of the Seoul circuit.

Robin Frijns made the best out of the second Attack Mode and the added time when he drove to a strong P4 finish ahead of Andretti’s Oliver Askew, with Vergne in P6 also able to use the extra power to defend his position on Evans

Frijns’s teammate Nick Cassidy crossed the finish line in P8 with the fastest lap for a double point finish for Envision Racing. Behind him, Sébastian Buemi drove to a P9 result ahead of Da Costa who recovered to P10 to snatch the final point available in the race.