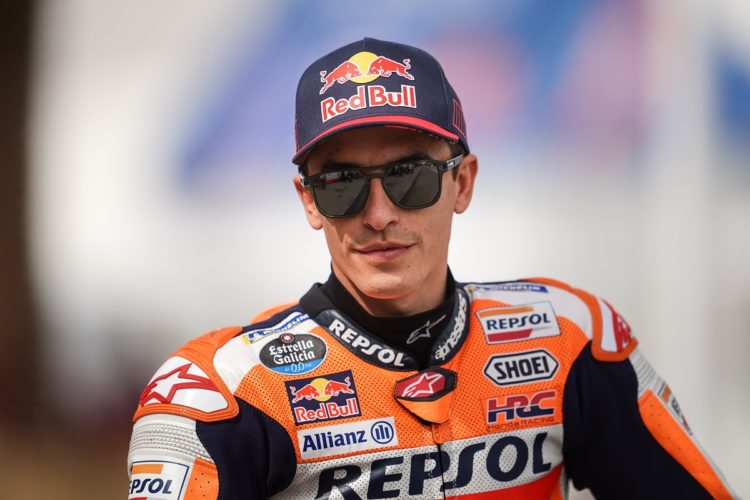 Marc Marquez will attend next weekend’s Austrian Grand Prix as he continues to make progress following his latest arm operation two weeks ago according to the Honda MotoGP team.

The six-time MotoGP world champion has been working on rehabilitation in recent months after the humerus bone in his right arm that he injured in a fearsome crash at Jerez back in 2020 failed to heal correctly, forcing him to ride with severe limitations as a result.

Marquez elected to step away from MotoGP competition in order to undergo a corrective procedure on the humerus – which had rotated 30 degrees further than it should throughout the initial healing process – following the Italian GP back in May, and has failed to visit a race weekend since having decided to focus on recovering at home in Spain.

As his currently-unscheduled return gets closer, Marquez will now re-join his Honda squad at the Red Bull Ring next weekend in order to try and “understand the 2022 bike, the situation and what is happening” so that he can hit the ground running upon his racing resumption.

“Honda is in a critical moment, and I am speaking a lot with my team and trying to understand the 2022 bike, the situation and what is happening,” explained Marquez.

“This is why I will go to Austria, to speak to everyone and to meet with the HRC staff from Japan to work for the future.

“I’m speaking a lot with Stefan Bradl as well, us and Santi (Hernandez) are working together and testing things – both know how I ride.

“I said in Mugello that I will be at home, but I want to stay connected.

“With the previous operation I disconnected too much, and I want to be involved so that when I come back, I will have everything fresh.”

Marquez went on to reflect on his rehabilitation process so far, admitting he is feeling “optimistic” that he can return to his pre-Jerez ’20 fitness level with the latest procedure, conceding that he knew at the Spanish GP at Jerez in early May that “something had to change.”

“Step by step I am feeling better, and the bone is healing in a good way, which is the best news of all,” continued Marquez.

“We are still in rehabilitation mode; I am working very hard on the cardio side to try and be ready.

“At the end of August, I have another medical check, from there we can make another step with the rehabilitation and really start pushing and building muscles.

“Some days are better than others, but this is all part of the journey.

“I’m optimistic, but I don’t want to say too much about timings until we have this check – it’s not the time to push too much.

“I have waited a long time for these kinds of feelings.

“It has been a struggle, it’s not two days or two months I have been struggling, it’s two years.

“I won some races last year like this, but I was struggling a lot.

“In Jerez I realised something had to change. It was hard and is hard now mentally – not because I am not racing, but because you always have this doubt about the arm.

“I can’t have another operation. I am convinced this one will be good, but these thoughts are always there in the back of your mind.”