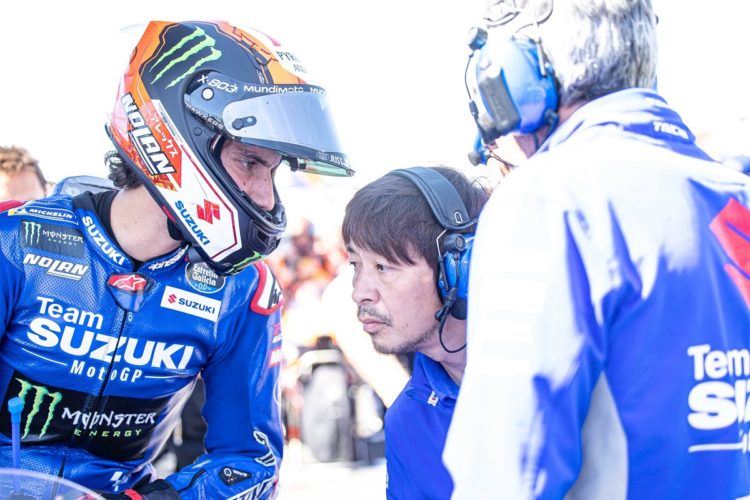 Alex Rins says he charge for victory in the British Grand Prix was stunted after being passed by Jack Miller, the Spaniard revealing he started suffering from copious rear “spinning.”

The Suzuki pilot scythed through the pack early on having started a lowly 11th, Rins moving into the lead by lap six as he looked to take his and Suzuki’s first win in nearly two years.

Having led the next half-dozen laps, he was then passed by factory Ducati pairing Miller and eventual race victor Francesco Bagnaia – signifying a swift fall through the field across the rest of the encounter that saw him take the chequered flag in seventh.

Rins revealed that he started to suffer a significant amount of rear “spinning” after falling back into traffic, thus leaving him defenceless from attack – the three-time premier class race winner conceding that “when Miller overtook me the race changed completely.”

“Yeah me too (favourite for victory), when I was there (in lead) it was so easy, I was riding quite fast but I was controlling the throttle quite a lot and was not spinning very much,” explained Rins.

“I was managing things quite well but the problem was when Miller overtook me the race changed completely, even with a very low percentage of throttle I was spinning on the right-hand corners so we need to understand what happened.

“During practice I was doing a good pace and was riding well but in the end during the race I couldn’t do it, so we need to analyze with the team and Michelin to see what happened and we’ll look forward to the next race.

“We were looking at the data compared to warm-up after the race to see why it was happening and why it was impossible for me to hold the laptime, and the throttle control was better than in the warm-up, so it’s strange.

“Overall we did a really good job and were always in the top positions; I had a good start so now we look forward to Austria.”

Rins’ team-mate Joan Mir meanwhile failed to stop the rot in what has been a severely sub-par 2022 campaign so far after crashing from seventh at Stowe with just six circulations left to run – thus extending his podium drought to last November in the Algarve GP.

The 2020 MotoGP world champion said he “didn’t expect” to lose the front of his GSX-RR, but reckons the reason for his fifth DNF in the past eight events is due to having to “push really hard to be in the group and overtake.”

“I was coming from the back and I was getting closer and closer to the (front) group, but when I was there I was struggling to stop the bike because I was having trouble with the front when I got close to other guys,” said Mir.

“I didn’t expect to lose the front at Turn 7, but these things can happen.

“I’m quite happy with the pace we showed during the race as we went from slower to faster, and the pace towards the end was strong so we just need to take the positives.

“Before we were behind the top guys, but this weekend we’ve seen something interesting for the future to improve the bike, so we will keep working.

“I have to push really hard to be in the group and overtake, and we hadn’t raced in conditions like this across the weekend so the pressures probably weren’t perfect, so we’re not going to think too much about it and keep working.”