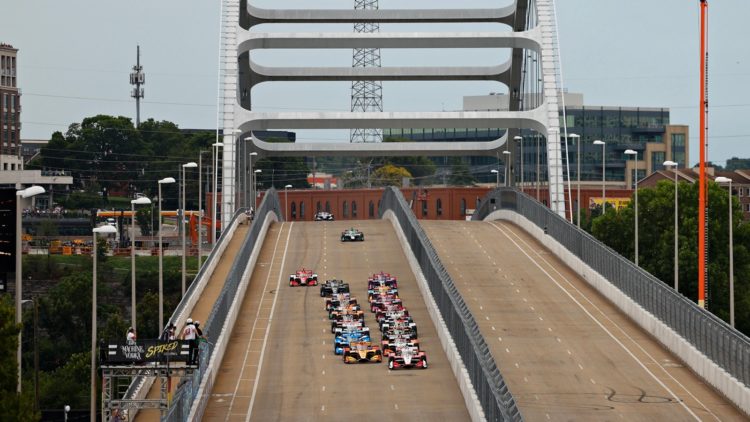 Drivers at the back were still catching up to the pack when the green flag was thrown. Photo: IndyCar

During this year’s running of the Music City Grand Prix, all starts and restarts were completed on the back side of the course, with a temporary starter’s stand erected after the bridge towards turn 9.

The location of the start zone was chosen so that drivers would have a wider first corner to navigate, which would help to prevent a pile-up while the field was still closely bunched together.

A different problem presented itself, however, which was that drivers at the back of the field cresting the bridge had a hard time seeing if the cars in front had been given the green flag already.

The lack of visibility led to its own problems during the race’s eight restarts, and caused at least one driver to jump a restart and be ordered to give the positions back by race control.

“I don’t know what they can do,” admitted Colton Herta after the race.  “I don’t think that restarting on the bridge was a good thing.

“I thought the closing speeds were incredibly unsafe, and I’m sure that they’re going to probably change it to something else for next year because it was really dangerous. Especially going over a bridge like that. You don’t want to go over the back of somebody.

Herta wasn’t the only driver to think the visibility on the restarts was unsafe, as the eventual race winner Scott Dixon also had a moment where he almost ran into his competitors.

“I had a moment, too, where you come over the top, and then everybody is stopped,” said Dixon. “It’s maybe a big accident waiting to happen unless they make you go at the top of the bridge so you still have a sight line of people in front of you, and everybody that you do see is accelerating.

“I think even on the first restart I kind of slowed down to the cars that were in front, and then the two behind me just went. It’s because they, I’m guessing, didn’t see coming over the top.

“It’s definitely much easier when you are at the front, that’s for sure, but there was a huge accordion effect coming over the top once you were kind of 10th or 15th back. I don’t know how to fix that unless they go at the top.”

IndyCar officials instructed drivers to maintain pace car speeds until they nearly reached the end of the bridge, which meant that others behind were just cresting the top at the time.

Dixon’s suggestion to begin racing earlier on the straight would give better visibility, but would also mean that the field would be travelling at higher speeds for the first corner.  In addition, there would be less time for drivers to pack up after exiting the tight and winding corners beforehand.

Multiple changes were made to the track and relevant procedures this year, which took notes from the race’s inaugural running in 2021, and more adjustments will likely be considered for next season in order to address the new concerns.