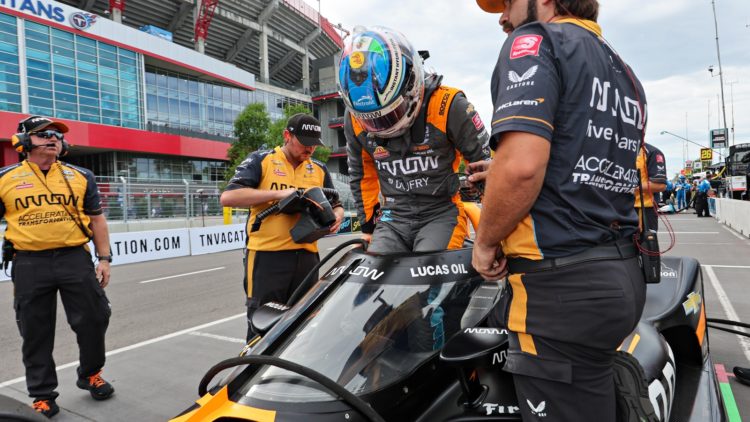 Pato O"Ward climbs into his hot cockpit to head out on track. Photo: IndyCar

As has been the case multiple times in the past, a hot and humid IndyCar race weekend is leading to drivers suffering uncomfortably high temperatures in the cockpit while racing around the track.

Since the introduction of the Aeroscreen in 2020, driver comfort has been the biggest drawback to the safety system.  Airflow inlets hooked to the helmet, ducting through the nose, and occasionally the use of an overhead air scoop have done little to move hot air away from the drivers.

Most teams have adopted cool suits, which circulate relatively cool water through tubing sewn into a shirt underneath a driver’s firesuit. But not all teams choose to install them, and some drivers prefer not to wear them, even on the hottest weekends.

The reality is that the system adds extra weight to the car, somewhere around 15 pounds, and teams do not want to sacrifice performance if they can help it.

That leads to drivers having to deal with excessive temperatures without any extra assistance, and some are able to handle the extreme heat better than others.

Talking at this weekend’s Music City Grand Prix in Nashville, where high humidity is again bringing the problem to everyone’s attention, Pato O’Ward described how much the lack of a cool suit is affecting him.

“I think first of all we don’t have the system,” said O’Ward about his Arrow McLaren SP team’s lack of adoption of the system. “Two, I think as a team we just haven’t looked into it. We have sort of, but, yeah, we don’t have ’em here.

“Maybe something to look into next year for sure. I didn’t think it was going to be this bad. It’s worse than what I remember last year being. It’s really, really bad.

“It’s horrible in the car. It’s unbearable. Like, I think this is probably going to be the worst race. Yeah, I cannot explain how horrendous it is inside of the car.

Other teams are choosing to run the cooling system to keep their drivers comfortable, but adoption is far from widespread on account of the weight penalty.

Last year, Sebastien Bourdais described his own struggles with the heat, and related that it would be much safer if IndyCar would mandate use of the cool suit system.

There was some discussion when the Aeroscreen was initially adopted that the windscreen portion could be removed for the slower street circuits to help with airflow, but it is not believed that IndyCar officials have seriously considered that approach.

At this point, if a team decides that a cool suit solution is not going to be implemented, the only option for drivers is to cool themselves and hydrate as much as possible leading up to the event and hope their extensive training is enough to keep their performance level high for the entire race.