Russell: Mercedes will never have fastest F1 car in 2022 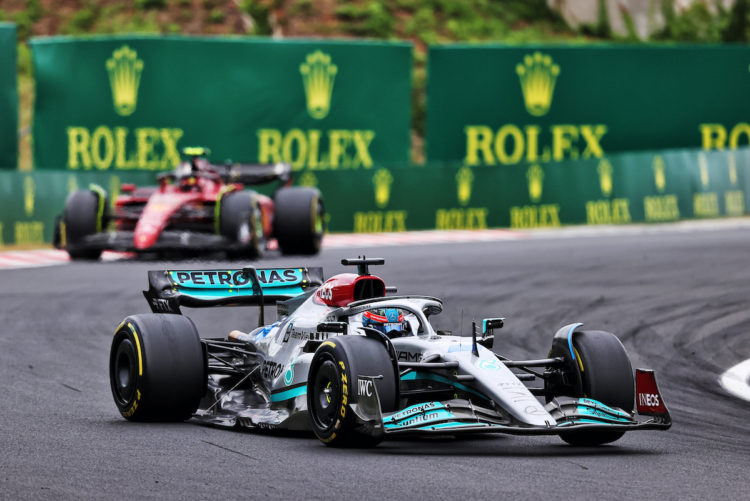 George Russell believes that Mercedes will never possess the fastest car in 2022, despite its recent improvements.

Mercedes started the 2022 Formula 1 season on the back foot following the introduction of new technical regulations.

However, at the last handful of grands prix, it has seen an uptick in form and has taken back-to-back double podium results with Lewis Hamilton and George Russell.

Russell produced a shock result at the most recent qualifying session in Hungary, claiming his maiden pole position in the sport.

But despite the recent improvements, Russell doesn’t believe that the Brackley-based squad will ever have the outright quickest car this year.

“We’re definitely closing that gap, there’s no doubt, but the four cars ahead of us certainly have the pace advantage,” Russell said.

“There’s no doubt about that. But I think, as a team, we’re slowly closing the gap. Hopefully after the summer break, we’ll add some extra things to the car, but as does everybody, so it’s not going to be straightforward.

“We still believe we can probably fight for victories at some point this season. But I don’t think we’ll probably ever have the car that will be outright quickest.”

Only Red Bull and Ferrari have taken race victories this year, however a run of poor form at Ferrari has seen it drop away from Red Bull in the standings.

Mercedes currently sits just 30 points behind the Italian outfit in the Constructors’ Championship, with a battle emerging between the two for second place.

The German manufacturer says that it will be bringing more car upgrades in the second half of the season, warning its rivals that it still has pace to extract from the W13 car.