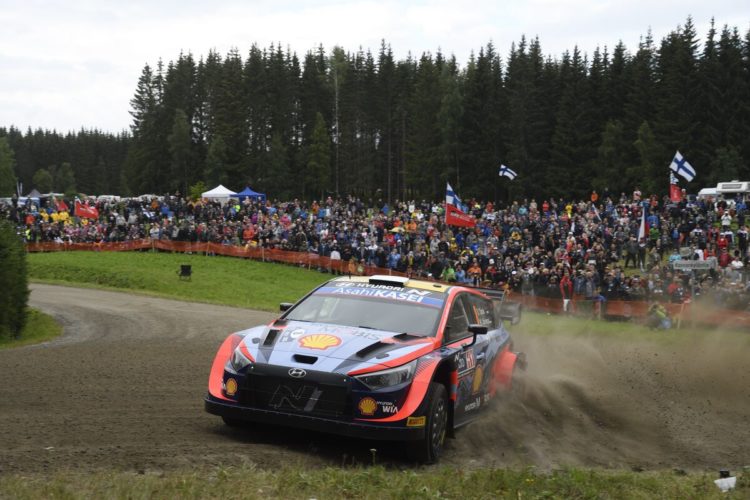 Ott Tanak finished Friday at the top of the standings by 3.8s. Esapekka Lappi would be the highest Toyota driver with Welshman Elfyn Evans third.

Despite a quick start on the morning loop by Tanak, Lappi would spend the afternoon chipping away at the gap, making sure the Hyundai driver only held a slender lead going into Saturday.

Fan favourite event, Rally Finland got underway on Thursday with Thierry Neuville blasting out the blocks to take the win on the 3.48km stage. Neuville, who currently sits second in the points, topped his teammate Ott Tanak to end the day 1.2s ahead. The third position went to Toyota driver, Takamoto Katsuta who was a further 1.4s back despite having no hybrid boost in his car.

Neuville wasn’t overly confident about his prospects for the rally despite topping the times. “At the moment I do not feel comfortable in the car. We made some setup changes in shakedown and I’m just crossing my fingers that I have a better feeling tomorrow”.

Friday got underway with a Hyundai in the lead, but it wasn’t Thursday’s winner; Ott Tanak out-paced Esapekka Lappi on the morning loop. The Estonian pulled out a 6.2s lead prior to the afternoon runs with one of the stages canceled. Tanak started with a gap of 2.7s over the Finn after the first stage and despite gaining 3 tenths in Lankamaa, Lappi would have to wait to make his presence felt more.

One of Tanak’s teammates didn’t have a good start to Friday. Oliver Solberg rolled his Hyundai on the opening stage on the first turn. Solberg, who hasn’t had a good run of rallies, and his co-driver were ok after the accident but were out for the day.

Tanak went on to extend his lead in SS7 to 8.7s but was chased by a trio of Toyotas. Elfyn Evans held third place with a 15.3s gap to the leading Hyundai, with championship leader Kalle Rovanpera rounding out the top 4 a further 2s back.

Tanak was becoming the only challenger to Toyota as Neuville had fallen back after Thursday and was running seventh after complaining about a lack of grip.

SS8 saw Ford debutant Jari Huttunen, hit trouble with a fuel pressure problem on his Puma. Huttunen was making his top category debut this weekend and was going quite steady when he was forced to stop 13.7km into the stage.

It wasn’t all doom and gloom at Ford though as Craig Breen made his way into the top 5 only 0.6s ahead of Katsuta. Ford’s rallies have had a habit of being filled with drama which Breen was keen to avoid.

The last three stages saw the gap tighten at the top, Esapekka Lappi would start to cut into Tanak’s lead from SS8 onwards. The Finn would finish the day 3.8s behind the two-time Rally Finland winner. Elfyn Evans occupied third but 19.3s off the leader with Rovanpera only 1.7s behind.

Breen would finish the day in fifth 32.5s back and Katsuta would make it four Toyotas in the top 6. 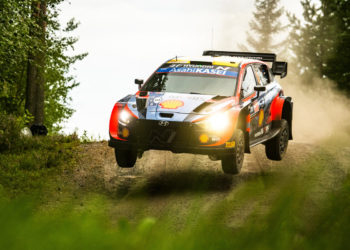