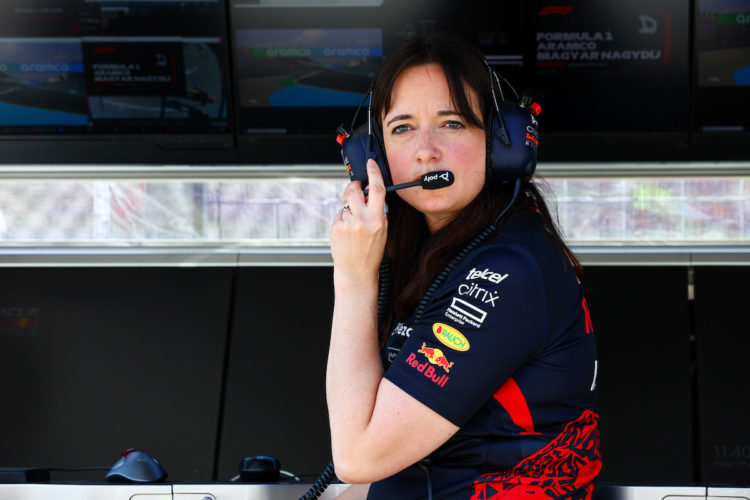 BUDAPEST, HUNGARY - JULY 29: Hannah Schmitz, Principal Strategy Engineer at Red Bull Racing looks on prior to practice ahead of the F1 Grand Prix of Hungary at Hungaroring on July 29, 2022 in Budapest, Hungary. (Photo by Mark Thompson/Getty Images) // Getty Images / Red Bull Content Pool // SI202207290071 // Usage for editorial use only //

Max Verstappen won his eighth race of the season, after starting from 10th on the grid.

Both Verstappen and team-mate Sergio Perez started the race on the Soft compound, while Ferrari began on the Mediums.

Red Bull was originally intending on using the Hard compound at the start of the race, but opted to change its mind before the start due to warm-up issues the drivers were having on the Soft compound.

The Hard tyre would prove to be a far from favourable tyre in the race, with Leclerc swapping to the compound during the race.

It saw him drop down the order, while Red Bull strategy allowed it to climb from the mid-pack to the front of the field.

“Because we were starting out of position, one of the more ‘classic’ strategies to do is to start on the harder tyre and go much longer, particularly with overtaking being difficult in Hungary,” Schmitz told the Sky F1 show Any Driven Monday.

“But we had also actually talked a lot pre-race about if the conditions are a bit damp and very cool, that we could consider the Soft tyre as the alternative, just because that might be better in those conditions.

“Then on the laps the grid both drivers were very vocal about having hardly any grip, even though they already had the Soft tyre.

“We all had a long discussion about it, with Christian [Horner] as well, and decided to change to the Soft tyres. There was a little bit of rain in the air as well, so really that was the better tyre for those conditions.

“Really our concern was whether we can make enough progress in that first stint to make it worth it, but obviously both drivers made great progress.”

Schmitz added that it was an “exciting” race for a strategist, as it steered away from a conventional one-stop strategy to the end of the grand prix.

Verstappen hailed Schmitz’s impact on the race: I think we have a lot of good guys in the team and girls,” he said after winning the grand prix.