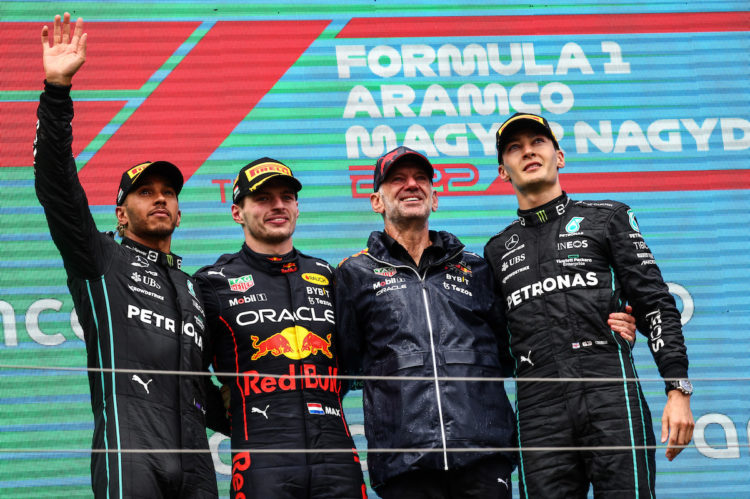 Ex-Formula 1 driver Jolyon Palmer says he expects Mercedes will take its first grand prix of the 2022 season “in the next handful of races”.

The reigning Constructors’ Champions started the 2022 campaign on the back foot, but has slowly been improving its car throughout the opening half of the year.

Last time out in Hungary, George Russell took pole position for the first time in his career, which also marked Mercedes’ first of the season.

Mercedes has quietly picked up a number of podium results in 2022, while lacklustre strategy calls and reliability issues from Ferrari has allowed Mercedes to close up behind it in the Constructors’ Championship.

The gap between the two teams reads just 30 points, while Red Bull holds a sizeable lead out front.

As it looks to get its hands on a winning trophy for the first time this year, Palmer expects that it will come sooner rather than later.

“13 races in and the trajectory of the team is the clearest of all on the grid,” Palmer wrote in a piece for Formula1.com.

“They are undoubtedly edging their way towards a first victory of the season, which I predict they will have in the next handful of races.

“The other benefit Mercedes have is Ferrari’s tendency not to maximise their potential thanks to less-than-ideal strategy calls.

“The gap between Leclerc and the Mercedes duo in the championship continues to shrink after Hungary and the battle for second in the Constructors’ Championship is also hotting up, thanks to Mercedes’ bulletproof reliability thus far, and their superior strategy.”

Palmer hailed Mercedes’ ability to transform its pace from Friday to Saturday after it endured a difficult opening day of on-track running.

“In theory this was a race that Mercedes weren’t expecting great things from, and it certainly looked as though they were in damage limitation mode after free practice.

“Sometimes you can’t tell how much performance teams are hiding throughout the Friday sessions, but Russell described it as ‘one of their toughest Fridays of the season’.

“Perhaps unsurprising, considering the bumpier and lower speed nature of the circuit.

“Given the wet FP3 on Saturday, it’s amazing the team managed to turn the car upside down and get it into a proper working window for qualifying, without any further representative running.”