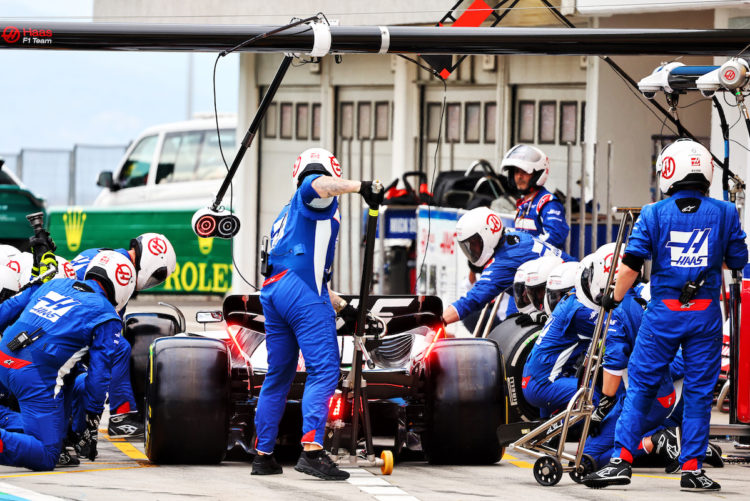 Haas team boss Guenther Steiner says that the Stewards at the Hungarian Grand Prix made a mistake when they ordered Kevin Magnussen to make a pit stop.

Magnussen picked up damage on the opening lap of the race after making contact with McLaren’s Daniel Ricciardo on the exit of the first corner.

The endplate hung off the main structure of the wing as a result, with the FIA showing Magnussen the black and orange flag.

It meant that the Danish driver was forced to make a pit stop on the grounds of safety – however Steiner disagrees with the call.

“It was a difficult race today for us,” he said. “Kevin with apparent front wing damage, which actually in our opinion was a mistake by the FIA to call us out on.

“The front wing was clearly safe to continue so we lost half a lap and that means our race was over and then obviously to get the tyres to work was difficult once we ended up in all the blue flags.”

Magnussen went on to finish 16th in the order, while team-mate Mick Schumacher also failed to secure points in 12th.

Haas arrived at the Hungaroring with an upgraded car, which was only used on Magnussen’s side of the garage due to a lack of spare parts.

Although he had his race compromised on the opening lap, Magnussen says that there are positives the team can take from the weekend with its new package.

“Our race was compromised massively by having to pit for the black and orange flag,” he said.

“I had slight contact at the start with one of the McLarens – I couldn’t avoid it – and it wasn’t that bad, so I was surprised to get the flag.

“Then later we couldn’t really switch the Hard tyre on, so it was good to get off that and do some laps on the Medium compound.

“It was positive from the perspective that we could put the car on track and immediately measure what we were hoping for.

“It’s just going to be a lot of work to get the lap time out of it and that’s going to come over the next few races – it’s new potential to be unlocked.”