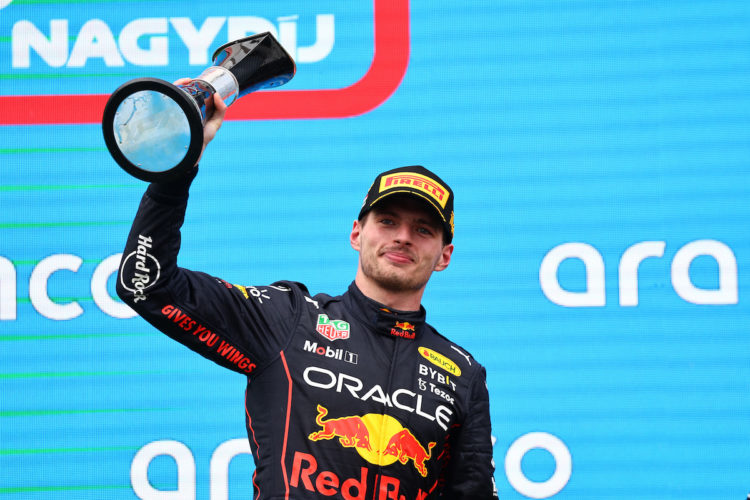 Max Verstappen has taken his eighth grand prix win of the 2022 Formula 1 season, as the Red Bull driver prevailed at the Hungaroring.

Verstappen started the race from 10th on the grid after enduring Power Unit issues during qualifying on Saturday.

The reigning World Champion progressed through the lower end of the top 10 runners in the opening laps, before he was able to overtake the Mercedes drivers through the pit stop phases of the race.

Verstappen soon found himself running behind race-leader Charles Leclerc, who moved ahead of pole-sitter George Russell earlier in the grand prix.

The Red Bull driver managed to move in front of Leclerc, but soon dropped behind again after he spun at the penultimate corner. However, it didn’t undo Verstappen’s race, as he soon recomposed himself and progressed ahead of Leclerc once more.

Leclerc was struggling for pace after making a surprise switch to the Hard compound at his second pit stop, which dented his pace. He then dropped behind Russell in the Mercedes, before Ferrari pitted Leclerc again for Soft tyres, dropping him to sixth.

The decision saw Ferrari come under further criticism, amid a series of questionable strategy calls this season.

As a result of the Hungarian GP, Verstappen now holds an 80-point lead in the Drivers’ Championship.

Mercedes scored its second consecutive double-podium finish as Lewis Hamilton and Russell crossed the line in second and third respectively.

Carlos Sainz was fourth, while Sergio Perez’s difficult weekend was capped off with a run to fifth place.

Lando Norris was the sole McLaren in the points, as he beat the Alpine duo of Fernando Alonso and Esteban Ocon to seventh place.

Alpine appeared to possess strong pace early on in the grand prix, and was the first to swap to the troublesome Hard compound.

On the weekend that he announced his retirement from F1, Sebastian Vettel captured the final point on offer, moving ahead of team-mate Lance Stroll in the latter stages of the race.

Valtteri Bottas was the only driver that failed to finish the grand prix, as he pulled over to the side of the road reporting a lack of power in the final stages.

F1 now enters its summer break, with the action resuming in months’ time at the Belgian Grand Prix from Spa-Francorchamps.