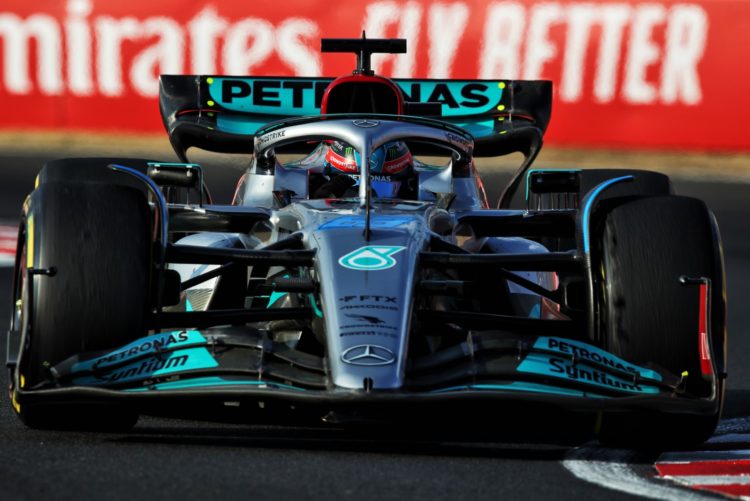 George Russell claimed a shock maiden pole position during a thrilling denouement to Formula 1 qualifying at the Hungarian Grand Prix.

The session was held in dry and overcast conditions following torrential rain earlier in the day that influenced the final practice session.

Mercedes lacked pace in dry conditions on Friday but Russell emerged as a contender in Q3 after splitting the Ferrari drivers after the opening runs.

Carlos Sainz, who led the way in the early stages of Q3, improved on his own benchmark to seemingly secure top spot, with team-mate Charles Leclerc unable to beat his time.

But Russell demoted the Ferrari drivers with a final push lap of 1:17.377s, snatching top spot by just 0.043s, to claim his first career pole.

Sainz wound up second, with Leclerc third, though Russell’s team-mate Lewis Hamilton was down in seventh after a suspected DRS issue.

Red Bull had a disastrous session with issues for both Max Verstappen and Sergio Perez.

Verstappen was only seventh after his first push lap due to a mistake through Turn 2, and as he exited the pits for his second run reported a loss of power.

Attempts were made to repair the problem but while Verstappen started the lap he was unable to set competitive times and abandoned the situation.

It left the reigning World Champion down at the foot of the top 10.

Perez failed to make it through to Q3 as he was marginally hampered by Kevin Magnussen into Turn 2, and was unable to unearth the required lap time.

Lando Norris was a strong fourth for McLaren as his Friday pace carried over into Saturday, while Alpine locked out the third row of the grid, last year’s winner Esteban Ocon edging Fernando Alonso.

Magnussen wound up 13th in the updated Haas, behind Alfa Romeo rookie Zhou Guanyu, with Mick Schumacher slowest in Q2 in the old-spec VF-22.

AlphaTauri suffered a double Q1 elimination as its struggles with its new package continued.

Yuki Tsunoda was 16th overall, with Pierre Gasly a lowly 19th, after he had a lap swift enough for Q2 deleted.

They were split by Williams’ Alexander Albon and Aston Martin’s Sebastian Vettel.

Nicholas Latifi was unable to convert his FP3 heroics into Q1 as he finished slowest of the 20 competitors despite setting a purple first sector on his push lap.

Latifi made an error through the final corner, costing him time, and leaving him at the back of the grid for the race.