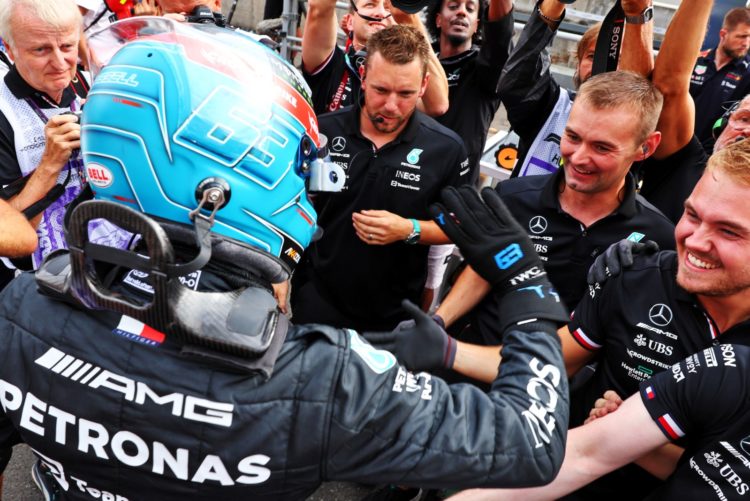 George Russell described his pole position at the Hungarian Grand Prix as “massive” for a Mercedes team that struggled for pace during practice.

Mercedes has shown signs of improvement in recent grands prix but was off the pace through Friday running at the Hungaroring as it carried out further set-up experiments with its W13.

In dry conditions on Saturday Russell sprung a surprise by splitting the Ferrari drivers on his first push lap in Q3, before overhauling Carlos Sainz for pole position in the closing moments.

“I’m not really thinking about myself to be honest,” said Russell, on the achievement of his maiden pole position. “But for us as a team, it’s massive.

“Yesterday was probably our toughest Friday of the whole season. We were all here until 11pm last night scratching our heads, morale was pretty down and we felt pretty lost.

“To come back and grab pole position 24 hours later, it’s just such a feeling because I know what we went through last night.”

On the discussions that went on at Mercedes Russell outlined that “they were more probably chats of overall philosophy and whether we’re going in the right direction.

“As a team we’re closing the gap but obviously yesterday was a disastrous day. We believe that there were many reasons as to why, and they all added up to why we were a second off the pace.

“But that felt like we were being a bit generous. To then have a day like today, maybe P1 on pure pace. But we definitely turned it around and we are probably back to where we kind of hope to be.”