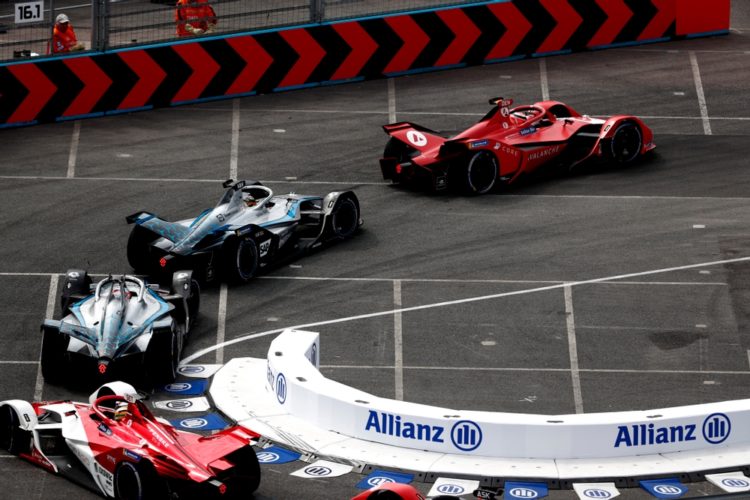 Jake Dennis prevailed at the first race of the Formula E weekend, as he took the second win in two years at the ExCeL London Circuit. With Mortara and Vergne out of the points, Vandoorne extends his championship lead with a comfortable second place.

The race went green at 3PM Local Time at the ExCeL London Exhibition Center – and right from the start it was clear that Jake Dennis was on it.

Behind him, Stoffel Vandoorne tried to put pressure on the Andretti driver on many occasions, ultimately failing in his attempts to overtake the Brit and finishing the race in second position. He was however able to extend his Championship lead over his rivals by a healthy 18 points.

There was Lap 1 contact which caused Edoardo Mortara – now third in the standings behind Jaguar’s Mitch Evans – to fall back behind the pack. The Venturi driver had to make an early stop after sustaining damage to his front wing. He was unfortunately caught up in the same incident which terminated Sam Bird’s race right into the first turn complex.

In the very same sequence of Turn 1 and 2, the Techeetah teammates also came together, allowing E.Dams driver Sébastien Buemi to get past both of them.

Jean-Éric Vergne was the biggest loser in this scenario, as the damage he sustained affected his pace – and he finished the race outside of the points in 13th position, while António Félix Da Costa managed to score 6 points with a 7th place finish.

The bright green Envision of Robin Frijns led the first charge making the best out of his 6 minutes of Attack Modes, setting up a chain reaction through the field. The Dutch driver was however unable to score any points, falling down to 16th place in the second half of the race

Sergio Sette Camara was able to hold up to his 4th position – even managing to overtake Mercedes EQ’s Nyck de Vries for a brief moment – until inevitably his pace started dropping, and he was swallowed up by the field, ultimately retiring before the checkered flag.

His teammate Antonio Giovinazzi, in the other red-and-white Dragon/Penske, could not find the pace to challenge the pack, and also ended up retiring before the end.

The top 2 went unchallenged for most of the race, but the final stages saw a fierce battle between Nyck de Vries and Envision’s Nick Cassidy, who despite his best attempts was unable to take the final spot on the podium from the reigning champion. He was however able to score 12 points, which allowed him to overtake Edoardo Mortara in the standings – making him now the closest title rival to Stoffel Vandoorne.

The London E-Prix weekend will continue tomorrow with another round of Qualifying and the second Race of this British double header.