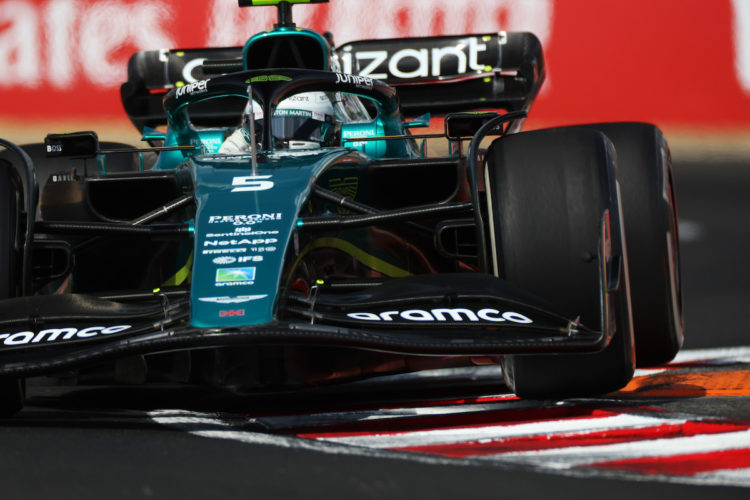 Aston Martin has downplayed the impact of its new Formula 1 rear wing, stating that it is “nothing special”.

The Silverstone-based squad unveiled a new rear wing design in Hungary, which caught the eye of many due to the new curved tips added to the edges of the rear wing.

There are fears that the concept goes against what the FIA looked to achieve by introducing the new-for-2022 cars, which aimed to allow cars to race closer together on the circuit.

Sebastian Vettel stated on Friday that the new wing was not worth a major step forward in terms of car performance.

“Developing a wing or developing idea, you normally do not wait until the last moment before you show it [to the FIA].

“We were in touch with the FIA all along the development [stage] to understand if this was something that would be accepted.

“It finally was so that for us was the moment where we said ‘OK, we’ll go for it’.

“I think it is nothing special, it is an interpretation of the rules. We developed the wing according to that in conjunction with the FIA. That’s it, basically.

Krack added that he was “not concerned about a super majority” ruling against the wing through the F1 Commission, asserting that the team “will cope with it” going forward.

Red Bull team boss Christian Horner implied that his team is happy with the concept if the FIA has deemed the design legal.

“I guess if it complies with the regulations, that’s the main thing. It opens up another avenue that’s interesting,” he said.

“Maybe for once we’ll copy something off an Aston Martin rather than the other way around,” Horner quipped.

Andreas Seidl, McLaren’s Team Principal added that “next week we will probably look into this design and then make our mind up if it’s a route we want to follow as well”.