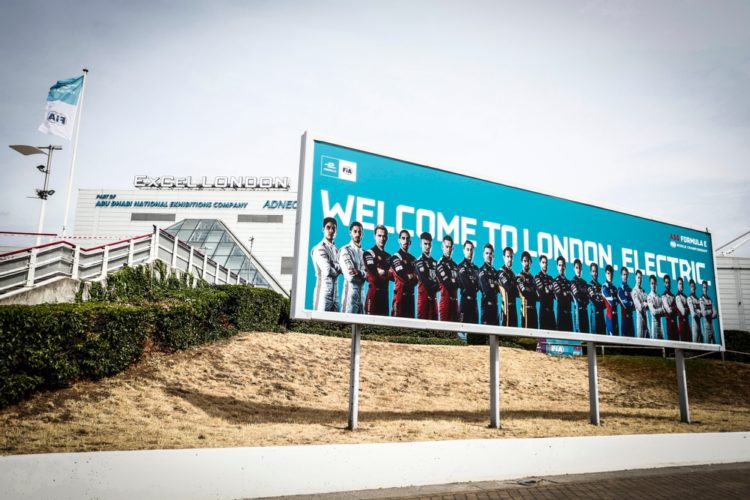 The ExCeL London Exhibition Center on the city’s Docklands lights up for the first time this weekend to host the first practice session of this penultimate round of the Formula E World Championship. The four-way title battle is nearing its closing stages, with Vandoorne leading the Championship after the New York double header. The Mercedes-EQ driver managed to transform his 11 points gap to Mortara into an exactly identical advantage over the Swiss-Italian driver of the Venturi team, and is going into this weekend as the favourite to win both races.

However, Mitch Evans and Jean-Eric Vergne are certainly not planning to watch the title battle unfold from the sidelines; third and fourth in the Championship, with a small gap to the Top 2, they could each snatch the title for themselves in these final rounds.

The layout of the London E-Prix – 30% of it indoors, 70% outdoors, with varying levels of grip which alone constitute a technical challenge for the teams – has changed since 2021; not only has the asphalt been resurfaced, but the back-to-back hairpins have been replaced with two fast chicanes from Turn 10 to Turn 13. Attack mode has also been moved over to a key overtaking spot, in Turn 16 – to hopefully encourage more action, and reduce the chance for incidents which last year prompted the intervention of several Safety Cars.

Only ten minutes into the session, it is the reigning Mercedes-EQ champion Nyck de Vries who sets the first benchmark with a 1:16.431. This bodes well for his teammate Stoffel Vandoorne, who will soon join him on track – but will not be able to beat his time, finishing the session in P8. Pascal Wehrlain and Mitch Evans will shortly lead the action, with Vergne also showing promising pace before sliding down to P17, unable to find the necessary grip to improve his laptime. Like him, Mortara will also struggle for grip – and with consequent snaps of oversteer – and will end the session with a crash after losing the rear of his Rokit Venturi into Turn 1.

Unexpectedly, it’s Dragon-Penske’s Sette Camara who will top the timing sheet with a 1:14.487 – almost two full tenths faster than Evans in second place – at the end of the session. His teammate Giovinazzi will join him soon, shooting up to fourth position ahead of both Mercedes-EQ drivers and only 0.064s behind Nick Cassidy in the bright green Envision Racing. A decent session for both Jaguar drivers, with Sam Bird also managing a respectful P9 after a rocky season.
There is still a lot of work to do ahead of the second practice session and then the first Qualifying round of the weekend; as seen especially with Mortara’s and Frijns attempts, the drivers are struggling for grip around a circuit that does not make the engineers’ job a straight-forward affair due to the very nature of both its asphalt, and the indoors/outdoors layout.

Dragon seems to have found that compromise in this first practice session, but it will have to be seen if they will be able to carry this pace throughout the weekend – and how quickly the Championship contenders will be able instead to turn things around.