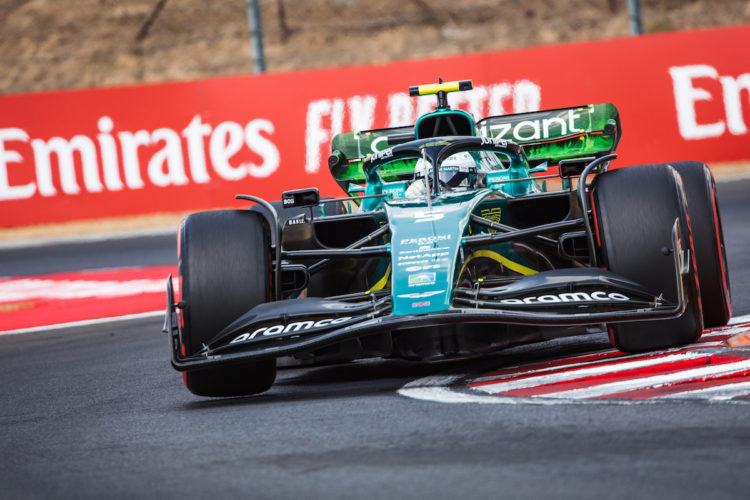 Aston Martin’s Sebastian Vettel says the team’s new Formula 1 rear wing is not worth a “massive step” in performance.

The Silverstone-based squad’s new upgrade turned heads in the paddock on Friday.

Aston Martin has struggled for performance at much of the events so far this season, but its new high downforce-spec wing has raised expectations among many for the Budapest weekend.

However, Vettel has denied that it will deliver the team a sizeable leap forward.

“I think overall it was a good day for us,” Vettel said. “We didn’t have any problems, we were able to I think get a good feel of the car.

“It’s still a bit disconnected here and there, and some stuff to do. Obviously, this is a track where you try to have and put all the downforce on the car that you can.

“Obviously, there’s a new rear wing, not a secret. It’s not a massive step in performance. I think it’s doing what it was supposed to, so you don’t see a big, big jump for us.

“I think we probably were a bit more aggressive than maybe other Fridays. So yeah, overall, it’s good to see that the team.”

According to reports, the FIA was consulted on the rear wing throughout its construction, who deemed that it was legal.

When asked if he was worried that the new wing could see a protest from rival teams, Vettel said: “No.”

Rain is expected to fall on Saturday, meaning qualifying could be a difficult affair for drivers around the narrow Hungaroring track.

Vettel says that Aston Martin simply has to make the car faster rather than focus on performance in wet weather in order to extract performance in the difficult conditions.

“The classical rain set-up doesn’t exist anymore, those have been gone for a long, long, long time,” he said.

“I probably witnessed just the end of it when I joined a long time ago! So yeah, obviously we try to make the car faster.