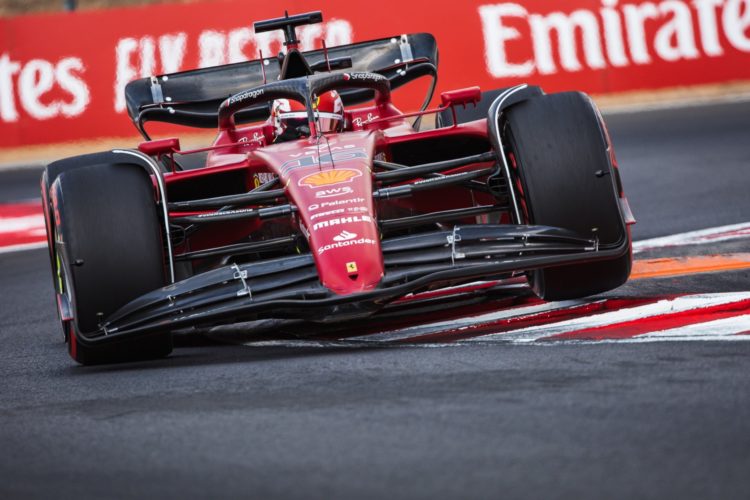 Leclerc set a time of 1:18.445s on Soft tyres to finish fastest in the one-hour session in hot and sunny conditions at the Hungaroring.

Wet weather, and cooler temperatures, are forecast to prevail for final practice and qualifying on Saturday.

McLaren, which slipped to fifth in the standings in France, emerged as the biggest threat to Ferrari through Friday afternoon.

Lando Norris classified second, 0.217s behind Leclerc, to split the Ferrari drivers, with Carlos Sainz 0.014s behind his ex-team-mate in third spot.

Norris’ speed was backed up by team-mate Daniel Ricciardo in fifth place.

Reigning World Champion Max Verstappen was fourth, 0.283s off the pace, though team-mate Sergio Perez had a scrappier session and wound up ninth.

Alpine’s Fernando Alonso was sixth while the soon-to-be-retiring Sebastian Vettel had one of his and Aston Martin’s most productive Fridays by finishing seventh.

Mercedes claimed a double podium finish in France but its prospects of replicating such a result in Hungary appear slim on the basis of Friday’s running.

George Russell complained of front locking en route to eighth overall, nine-tenths off the pace of Leclerc, while eight-time Hungarian GP winner Lewis Hamilton finished over a second down in 11th spot.

Both drivers were also significantly off the pace during the Medium tyre runs earlier in the session, in which Leclerc also held the advantage.

Valtteri Bottas returned to action after missing FP1 while Robert Kubica drove and he rounded out the top 10.

AlphaTauri, Haas and Williams finished at the bottom of the pecking order.

Pierre Gasly took 15th, ahead of Kevin Magnussen, who continued to build up learning in the upgraded Ferrari-inspired Haas VF-22.

Alexander Albon finished at the rear of the field after a spin into Turn 1 compromised his run plan.