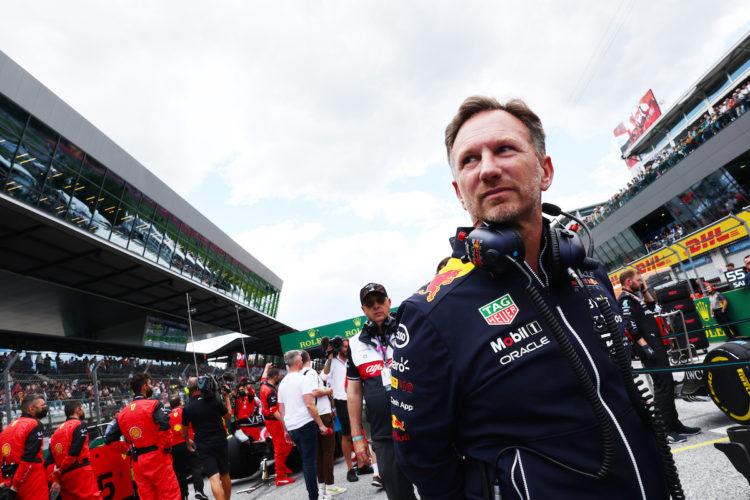 Christian Horner has addressed the recent rumours regarding a potential Formula 1 partnership between Red Bull and Porsche.

Earlier this week, it was revealed in documents that Porsche is set to enter F1 as an engine manufacturer in 2026, powering the Red Bull team.

However, the documents also declared that Porsche would take a 50 per cent stake in the Milton Keynes-based squad.

Speaking to Sky F1 in Hungary, Horner says that Porsche’s entry into the sport would be a positive addition to the grid.

“Well obviously [there’s been] plenty of speculation and I think I’ve said numerous times that we’re engaged with constructive discussions with Porsche,” he said.

“I think for Porsche to come into Formula 1, it would be a really positive thing. But there’s so many caveats to that, there’s the regulations to sort out.

“We’re only at the very beginning of a process where discussions can begin. But the first actual hurdle for any new manufacturer coming in is those technical regulations for the Power Unit for 2026 onward.

“I think we’re in a great position, the team is very strong. Red Bull Powertrains is going from strength to strength.

“We’ve recruited some more great talents, some more announcements coming out soon, some significant recruitments into the team.

“For us we’re on a journey, where that takes us in the future, if we decide to take on a partner, only time will tell.

“We’re in great shape and looking forward to exactly what these new regulations say on a sporting, technical but most importantly, financial basis.”

While Porsche’s entry currently appears to be most likely, the Volkswagen Group is also understood to be looking to add a second of its brand to the series, with Audi touted as a potential suitor.

However, Horner warned that new manufacturers can’t be steered away from entering F1 due to being unable to match investment from existing parties on the grid.

“Coming into Formula 1 as a newcomer, particularly on the powertrains side, discussions are ongoing, we have to have a glide path that we can get to a facility that matches decades of investment from our competitors,” he said.

“We want to make sure we can play on a level playing field.

“That applies to Porsche, that applies to Audi and it applies very much to Red Bull, having made that decision to enter as a Power Unit manufacturer.”