Shock failure identified as cause of Newgarden’s Iowa crash 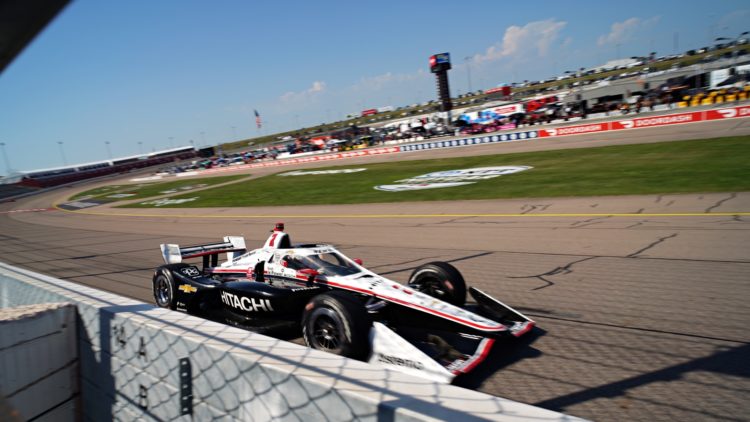 Newgarden was on his way to winning both Iowa races before the failure. Photo: Kevin Dejewski

When Josef Newgarden suddenly crashed out of the lead late in Sunday’s race from Iowa Speedway, blame was immediately placed on a mechanical failure based on television replays of the moment.

The right-rear corner of the car could be seen to sinking down unexpectedly just as the #2 lost control and careened towards the wall, leading to speculation of the failure.

With a couple days to analyze the wreckage, Team Penske has confirmed that to be case, and has laid blame on a failure of the right-rear shock itself.

Team Penske president Tim Cindric spoke to RACER on Tuesday to explain what their investigations revealed.

“I think it’s all pretty matter of fact from where I sit – the failure was the right-rear shock,” Cindric said. “That side of the car didn’t even hit the wall.

“Half of me wishes it was something that you could say, ‘Well, that’ll never happen again, because a bolt was loose, or this happened or that happened.’ Or maybe it was an old part that broke.

“But I’m of a mixed mind here because there’s nothing that you would say we should have done different.

“And it isn’t a trick part; we’ve run the same design for a long time.  That design hasn’t changed with the part that failed.  And the part was well within the mileage limitations of what we set.

“So we sent it off to an expert to tell us what happened, and we’ve got metallurgists to look at it.  There was no crack that propagated from some other accident.  So, the reason it failed is unknown.  It’s still a mystery.”

Newgarden initially appeared to be uninjured in the wreck, but ended up losing consciousness in the paddock well after he was released from the infield care center.

He was taken to hospital overnight for observation, but no evidence of injury was found in any scans.  He is scheduled to have an evaluation on Thursday to determine his ability to race in this weekend’s event, and Santino Ferrucci is on standby in case a substitute is needed.