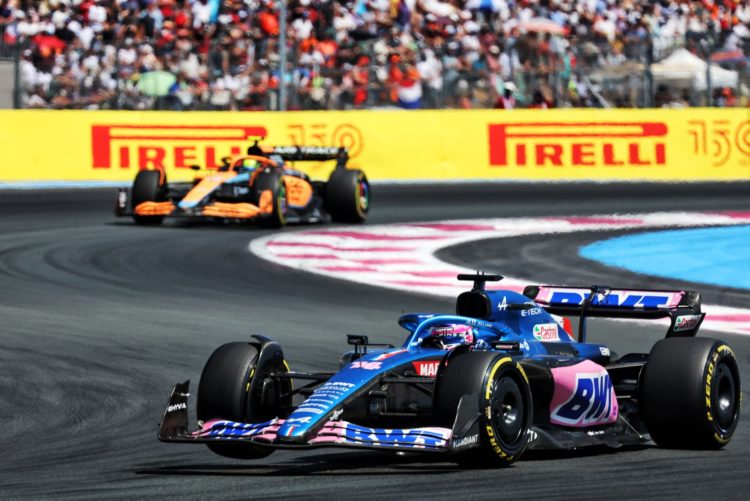 Alpine moved ahead of McLaren and into fourth place in the Constructors’ Championship for the first time since March following its result in France.

Fernando Alonso surged forwards at the start and ultimately settled into a rhythm, taking sixth, in front of McLaren’s Lando Norris.

Esteban Ocon was involved in a first-lap clash with Yuki Tsunoda, for which he was penalised, but he overcame the time sanction to beat Daniel Ricciardo to eighth spot.

The two teams entered the mid-point of the campaign level on points but Alpine has now edged four points clear of its opponent.

“I am pleased with our race,” said Alonso. “It was well-executed from our side and we managed the pace and tyres well.

“We had to work through a lot of things in terms of the car balance this weekend, but we ended up finishing just behind the top five positions, so a very solid race in the end and more points on the board for us.

“I had a good start climbing up to fifth, but then we dropped to sixth and perhaps resumed our normal position in the race. It shows that when we have a clean weekend like this one, then we can finish in the top six positions.”

Alpine CEO Laurent Rossi emphasised that the squad’s ambition for the rest of the season is now clear.

“We must do everything we can to remain in fourth place in the Constructors’ Championship,” said Rossi.

“It won’t be easy, but we must keep our flow of upgrades coming and put together strong race weekends – like we have done at home in France this weekend – for the remainder of the season.”