Russell: Verstappen and Leclerc ‘a step ahead of everyone else’ 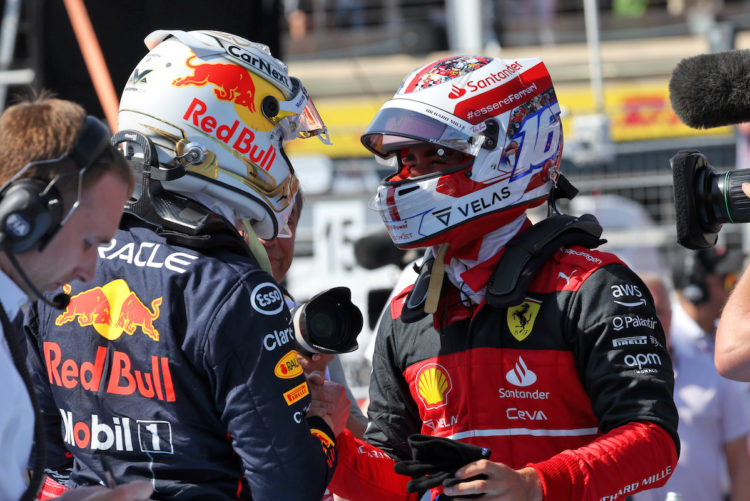 George Russell says that Red Bull’s Max Verstappen and Ferrari’s Charles Leclerc are currently “a step ahead of everyone else” on the Formula 1 grid.

On Saturday, Leclerc beat Verstappen to pole position at the Circuit Paul Ricard, with the margin being three tenths in the Monegasque’s favour.

It marked the fifth time this season that the duo ended qualifying in the leading two positions.

Russell was sixth in Saturday’s qualifying session from Le Castellet, with Mercedes’ team-mate Lewis Hamilton settling for fourth place in what was a disappointing day for the Brackley-based squad.

READ MORE: Pole deficit in France is a ‘slap in the face’ – Mercedes

Acknowledging that Verstappen and Leclerc are out of reach, Russell says that the French Grand Prix offers a good chance for Mercedes to claim another podium finish, with Ferrari’s Carlos Sainz starting from the back of the field.

“The high fuel pace was relatively competitive, we should have a chance against Checo [Perez],” Russell predicted.

“And even if Carlos was there probably would have had a chance against Carlos. But Max and Charles are a step ahead of everyone else at the moment.

“I think we’re the only team who closes the gap in race pace compared to qualifying pace. It’s the right way around for it to be, that’s how we prefer it. But obviously it’s put us in tricky spots for a lot of this year.”

Although Mercedes’ pace in qualifying wasn’t what it was expecting it to be, Russell is confident over the team’s speed in race trim.

“I think there’s definitely optimism because we feel like we do have a direction to keep chipping away at, and we do think we will make good progress,” he said.

“Qualifying is the day where you sort of you have that clearest case comparison to your rivals. And it’s clearly a bit difficult when we see how far we were from pole today. But I think tomorrow is the day we need to judge.

“I do think we will probably have a faster car tomorrow than we’ve had on average this season. And hopefully, it’s a totally different feeling and story this time tomorrow than it is currently.”