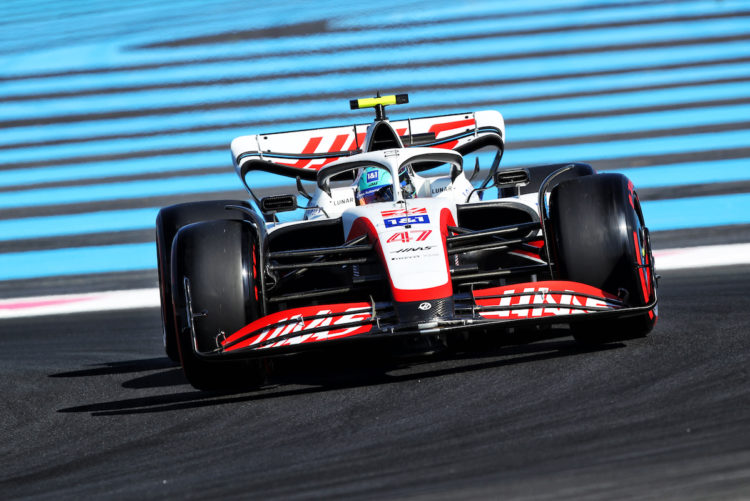 Schumacher failed to advance out of Q1 at the Circuit Paul Ricard on Saturday when he had his fastest lap time deleted after he was deemed to have exceeded track limits at Turn 3.

The German ended the session in 19th position, and is set to start Sunday’s race from 17th following grid penalties for team-mate Kevin Magnussen and Ferrari’s Carlos Sainz.

Last time out in Austria, Red Bull’s Sergio Perez advanced to Q3 despite exceeding track limits earlier in the session, and was penalised post-qualifying.

When asked if his own deleted lap time in France was fair, Schumacher pointed to Perez’s situation from Spielberg: “I would counter that question with was it fine that Checo lost his lap at the Red Bull Ring? Most drivers would say no.

“In that case, at the end there’s also a rule, and the rule is there for everybody.

“Unfortunately I exceeded it but it’s definitely something they will have to talk about to see if we can maybe find a less complicated way, maybe something which gives a bit more room.

“If there’s a bollard, and the bollard flies away, that’s a track limit infringement. But in that case, the bollard was still there.”

Schumacher asserts that he took the same racing line through Turn 3 during each of the practice sessions without having a lap time deleted.

“I think it would be good to know through free practice,” he said. “Nobody told me, I was doing the exact same line through practice one, two and three.

“And the fact that then, because of that, my lap was deleted in qualifying. Maybe it would be good to have a heads up, say ‘hey, that won’t be allowed in qualifying’.

“Then it’s good, you know what you’re allowed to do and what not. In my case, I was really quite confident it would be OK to do what I did.”