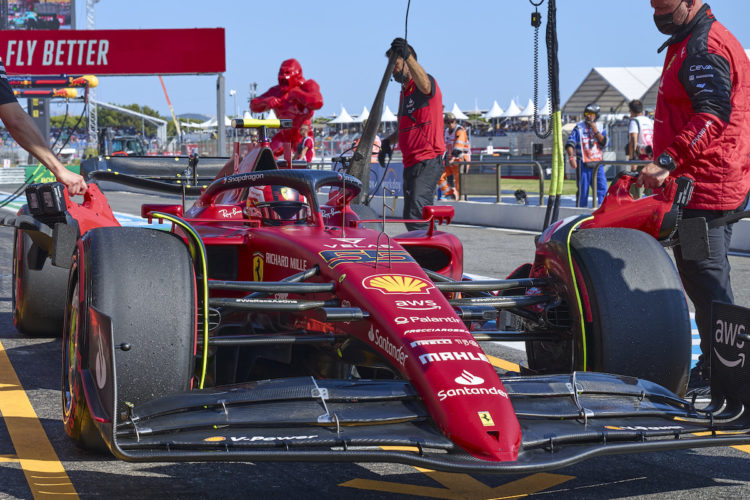 Carlos Sainz believes that criticism of the Ferrari team and its strategy calls in 2022 are unwarranted.

The Maranello-based outfit has come under considerable scrutiny at various points this year for its strategy decisions, particularly during the races at Monaco and Great Britain.

During Saturday’s qualifying session at the Circuit Paul Ricard, Sainz worked together with team-mate Charles Leclerc, providing him with a tow during his Q3 hot laps to help him secure pole position for the French Grand Prix.

Sainz will start Sunday’s race from the back of the field after he took on new Power Unit components for the event.

“I think we’ve received quite a lot of criticism on the strategy front and I think it’s a bit unfair,” Sainz said after Saturday’s qualifying session.

“Every team this season, there’s going to be mistakes with tyres, choosing tyres and everything. But I think this year the team has been very solid on the strategy side and I think today proves it.

“It’s nice to see. I think you need to give it to us and to Ferrari that we did a very nice day.”

Sainz has shown strong pace throughout the weekend in France, having won his maiden F1 race earlier this month at the Silverstone Circuit.

The Spaniard says that the plan for Ferrari at Le Castellet was always to give Leclerc a slipstream during qualifying – but he says that he is targeting a run back to the front of the field in the race.

“The target was to get to Q3 to give Charles the tow two times as we did,” Sainz said. “So, it was the plan for the whole weekend.

“I know how to give a good tow, because I know what I need in my quali lap if I wanted to gain two, three tenths from a tow. So, I knew what to do from the beginning and I think we executed it nicely.

“It’s a shame it has to come on a weekend that I’m probably feeling the best with the car and I’ve been very quick through yesterday’s practice.

“Today in quali, I think my Q2 lap was up there. But yeah, happy for the team, happy to see Charles profiting from it and getting the pole. Now it’s time for me to get back to the front tomorrow.”