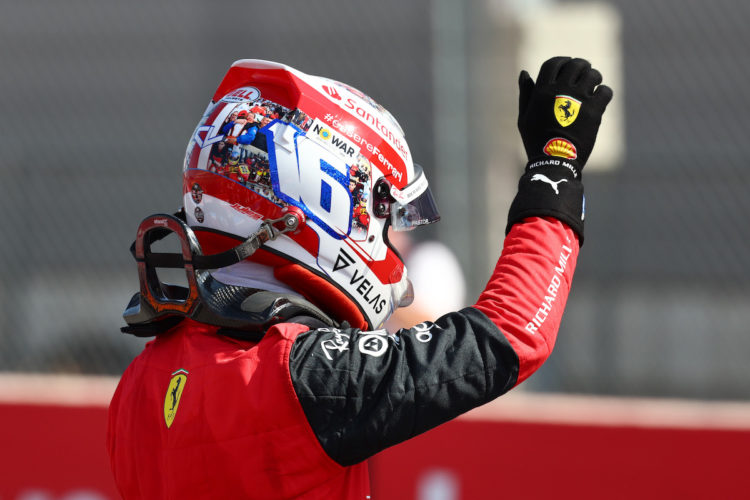 Charles Leclerc has hailed Ferrari for its “amazing teamwork” during qualifying at the French Grand Prix after securing pole position.

Leclerc beat Red Bull’s Max Verstappen to the top spot by three-tenths of a second, claiming his seventh pole of the 2022 season.

Team-mate Carlos Sainz advanced through to Q3 with the knowledge that he would be starting at the back of the field for taking on new Power Unit components this weekend.

However, the Spaniard assisted Leclerc by giving him a slipstream from Turns 9 to 11, which aided Leclerc’s lap time.

Without Sainz’s help, Leclerc believes that it would’ve been a much closer fight between himself and the Red Bull drivers.

“It was a great lap, I’ve struggled all weekend to put a lap together and I managed to put it [together],” Leclerc said.

“But I have to say, I always had the help of Carlos. That was amazing teamwork because without Carlos it would’ve been much more close.

“A huge thanks to Carlos and I hope that he can join us back in the fight for the win tomorrow.

“After Q1, I was very surprised by the pace that we had. Also in Q2 we were very strong, so somehow we managed to turn that around for qualifying. It’s a good surprise.”

Red Bull has had strong pace throughout the weekend in the high-speed middle sector, with Leclerc admitting that he is wary of their potential on Sunday.

“It feels good, but again it’s difficult to understand what the Red Bull guys done yesterday, there was loads of differences in terms of lap times. Let’s see how it goes tomorrow.”

Starting from second, Verstappen said of his chances: “We still have a decent race car, hopefully tomorrow will come into our favour. We are quick on the straights, hopefully we can use that tomorrow.”