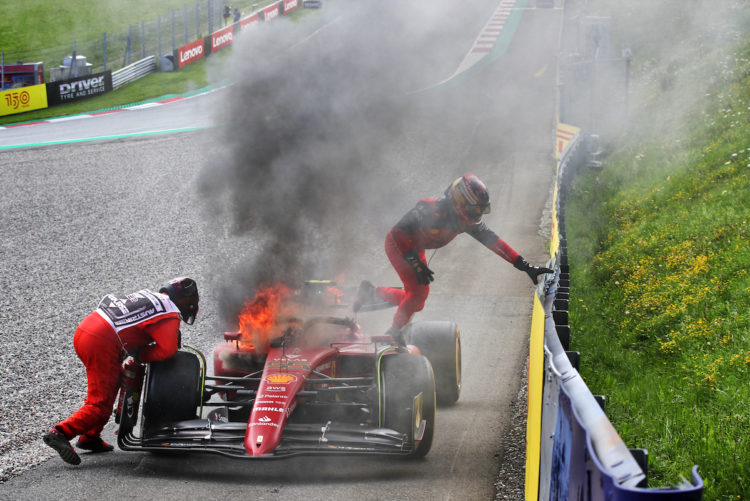 Carlos Sainz says that he did not intend to criticise the marshals at the Austrian Grand Prix for their response to his car catching on fire.

Sainz was forced to exit his car hastily towards the end of the race at the Red Bull Ring when his engine suddenly failed and erupted into flames.

However, his exit was hindered by the car being on a hill, with the Ferrari challenger rolling backwards as he tried to leave the cockpit.

A marshal arrived and placed a block behind a tyre to stop it from rolling, however Sainz labelled the process “a bit slow”.

The marshals clarified in a statement after the race weekend that they were acting under instructions from Race Control.

But the Spaniard stated in France that he was not meaning to criticise the trackside workers.

“I can understand why they wrote it because I guess what I said after the race felt like a criticism to them,” he said.

“I didn’t intend to come out at all with criticism, I am the first one that I always speak very highly about marshals and the heroes that they [are], the way they volunteer to be in these kind of situations and protect us.

“It wasn’t a comfortable moment in the car. It felt a bit hectic at the time and a bit messy.

“The explanation didn’t arrive to me, I saw it through the media, which is maybe something I will need to talk [about] with the FIA.”

Sainz says that further discussions are needed to speed up the response time to get to a driver that’s potentially in danger.

“If that is the procedure, it shows that we need to shorten the timings of the procedures, which is what I will discuss with the FIA,” he said.

“I’m sure it wasn’t the best of their abilities at the moment, especially in the heat of the moment – stupid joke!

“We just need to make sure how we can make it faster. If the car is rolling back, how do we react quicker? And how we will make it better this time?”