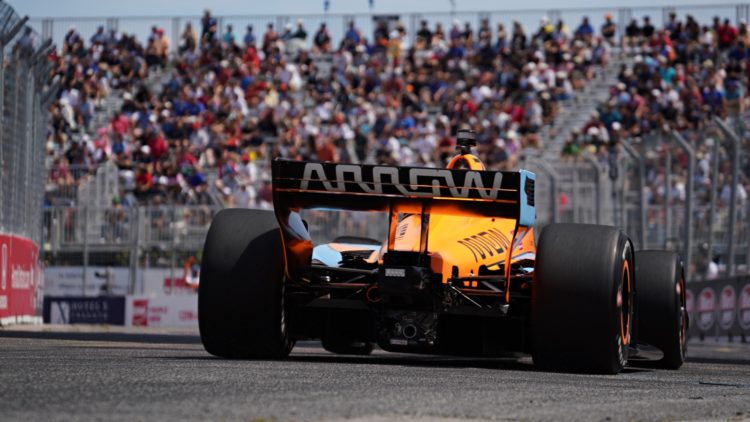 Who will drive McLaren's #7 IndyCar entry is only one of many questions to be answered. Photo: Kevin Dejewski

McLaren Racing has found itself with a new group of talented drivers under its umbrella of late, but the details about which driver will drive in which series have not yet been decided.

The team’s latest acquisition for next season Alex Palou, which hinges on the resolution of a contract dispute with the champion’s current team Chip Ganassi Racing, adds another piece to the puzzle that is not yet built.

Just in the past few months, McLaren has hired Alexander Rossi away from Andretti Autosport, retained its IndyCar duo Felix Rosenqvist and Pato O’Ward, as well as the recent Palou announcement that came earlier this week.  And not all of those drivers are slated to stay in IndyCar.

Rosenqvist and Palou in particular had hiring announcements that contained purposefully vague language as to which series they would drive in 2023.  In addition, Palou’s contract contained an offer of a test in a McLaren F1 car, matching the experience O’Ward was given late last year.

McLaren has plentiful to options to place drivers, including an F1 team, an expanding IndyCar team, and a newly-acquired Formula E as well.  Recent questions about Daniel Ricciardo’s future in F1 have only fueled speculation about where each driver in the McLaren stable will be find himself next season, and beyond.

O’Ward weighed in on the situation he finds himself in the middle of, and stated that he believes the decision of which driver will ultimately get an F1 seat is firmly out of each driver’s hands at this point.

“I think it’s not going to come down to who is better, because I feel like everyone is good,” said O’Ward at IndyCar’s Toronto event.  “It’s going to come to a point of – first of all, is there a seat [available in F1]?  Second of all, who’s got the super license?  Third of all, who meets the criteria of what the sponsors want, and ultimately who [the team] think works best for the F1 type.

“We’re all far into our careers where we all have our own ways of working.  Everybody has their own way.  Who knows who’s going to fit into the way the team wants you to be.  I think that’s what it’s going to come down to.  I think we’re all good, and I think we’re all capable of doing it, and we’re all capable of being winners there.  It’s just who fits the criteria I guess of what they want at the right time.

“If they choose someone, does he have the super license, does he – There are so many factors that just keep coming into play, I’ve just forgotten about it.  I don’t care, because it’s out of my control.  All I can do is perform, which I have been doing every single weekend in IndyCar.

“What I’ve learned in my career, is you be you.  You work with your engineers to get the best out of what you need from the car.  And that’s how you’re going to enjoy it.  I’m going to be me.  To me, it’s not worth it.  Every time someone tries to change you, everything just goes worse.”

Usually mid-season driver signing announcements constitute what ‘silly season’ is all about, but that is only half of the story this time around.  The other half is figuring out where McLaren is going to place all of its newly acquired talent.

Specifically concerning Alex Palou’s situation, O’Ward went on to say that he was unaware that the news would transpire as it did earlier in the week, and learned about the dispute when it went public.

“I was at dinner with Felix [Rosenqvist], and we found out together,” said O’Ward.  “I called Zak [Brown], but first I texted with Taylor [Kiel, AMSP President], the guys that have the most information. I went to the guy that has all the answers and called him.

“We’re all floating pieces at the moment.  I don’t know if [Palou’s] going to be with us in IndyCar.  That’s a great Zak question, because I don’t even know what’s going to happen.”