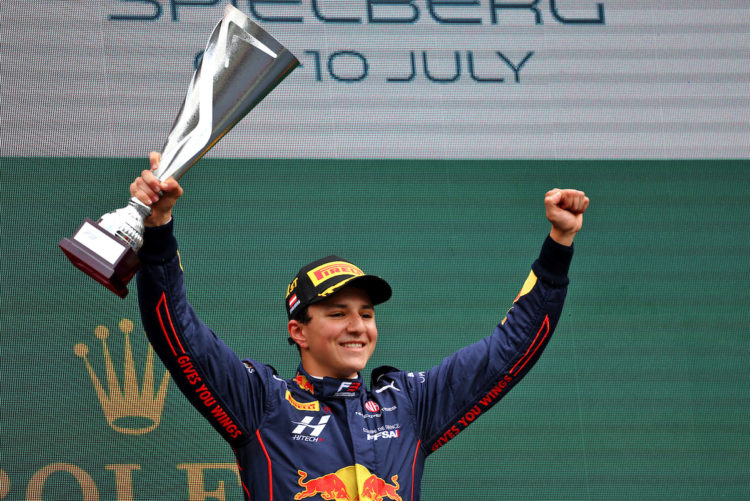 Isack Hadjar took his third race victory of the 2022 Formula 3 season, as he dominated a Feature Race in difficult conditions in Austria.

Rain pelted the circuit prior to the start of the race, with Race Control opting to start the event behind the Safety Car. After drivers grasped the conditions, they were released, with Victor Martins putting pressure on Hadjar for the lead.

Hadjar withstood the pressure throughout the opening laps, and soon began to pull away from the rest of the field.

The pack was neutralised late on when Charouz Racing System drivers Zdenek Chovanec and Francesco Pizzi collided for the second time in the race, causing a Safety Car. However, Hadjar controlled the restart and was untouchable all the way to the chequered flag.

Martins had to settle for second place, and is now just one championship point ahead of Hadjar in the lead of the Drivers’ Championship. Oliver Bearman took the final place on the podium, his second third place finish in three races.

Arthur Leclerc just missed out on a top three finish in fourth place. He was challenged late on by Kaylen Frederick, however the American collided with Roman Stanek late on and sustained a puncture.

Zane Maloney was fifth at the chequered flag ahead of Trident team-mate Stanek. Francesco Colapinto, who ended the Sprint Race on the podium, was seventh.

Alexander Smolyar was eighth and the sole MP Motorsport car inside the top 10, ahead of Jenzer Motorsport’s William Alatalo and Ido Cohen.

Formula 3 will return at the end of this month for round six at the Hungaroring, before the August summer break.