Glickenhaus leads by 50s at Monza, 2 hours in 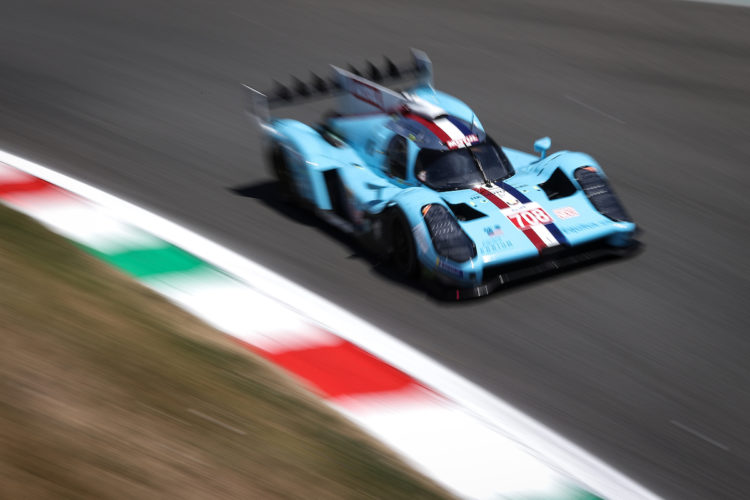 Romain Dumas started the car and created a large gap to the other five Hypercars, despite two lengthy full course yellows.

The second of those FCYs was for the stranded #93 Peugeot 9X8, making its debut this weekend. Mikkel Jensen stopped the car on track, just like in qualifying, but power cycled the car and goyt it going, trundling slowly around the Italian circuit back to the pits under yellow flags.

However, at the pitlane entry after Parabolica, the final corner, the car stopped again, this time for longer. Jensen was doing everything he could to get it moving, but to no avail. Eventually a marshal pushed the car further into the pitlane and out of harm’s way — back breaking work in the 30°C plus heat.

The #7 Toyota, pilotted by Jose Maria Lopez since the start, is second, with the #36 Alpine third, Andre Negrao seven seconds off Lopez. Sebastien Buemi in the #8 Toyota is fourth, having seemingly suffered some kind of issue in the first hour of the race, dropping back from second to behind the sister Toyota and Alpine.

The #94 Peugeot is fifth, James Rossiter almost 10 seconds off Buemi. The stricken #93 Peugeot is still running but is 35 laps down and in last place overall.

In LMP2, polesitter Filipe Albuquerque leads in the #22 United Autosports Oreca 07-Gibson, although teammate Will Owen started the car. The Portuguese driver only has a lead of half a second over Ferdinand Habsburg in the #41 Realteam by WRT Oreca 07-Gibson, though, with the #9 Prema Oreca 07-Gibson, currently with Lorenzo Colombo behind the wheel, not far behind either.

Pre-race, Colombo told MotorsportWeek.com, “We just need to drive the best way possible. Louis (Deletraz) is taking the start, there are some gentleman and silvers around him so he’ll have to take care. But I think after that we’ve got a good car to jump up through the field, hopefully we can build a gap and manage it. “

Deletrazs quickly moved through his rivals at the start, taking the lead from Owen in the #22 and holding it. The Italian former single seater driver remains very much in the hunt though, with Colombo also saying Prema were focused on their race.

In GTE-Pro, Af Corse lead with a 1-2, Alessandro Pier Guidi, who qualified the car on pole and started the car, leading in the #51 AF Corse Ferrari 488 GTE EVO. His teammate Antonio Fuoco is second in the sister #52 AF Corse Ferrari, while Kevin Estre, driving the #92 Porsche 911 RSR-19 is third. Nick Tandy has previoiusly got as high as second in the race but currently lies fourth in the #64 Corvette C8.R.

Gianmaria Bruni is fifth in class in the #91 Porsche.

Over in GTE Am, the #33 TF Sport Aston Martin Vantage AMR leads, with Henrique Chaves at the wheel. The polesitting #85 Iron Dames Ferrari 488 GTE EVO is second, with Michelle Gatting two and a half seconds behind Chaves. In third is the #77 Dempsey-Proton Porsche 911 RSR-19 of Sebastian Priaulx.