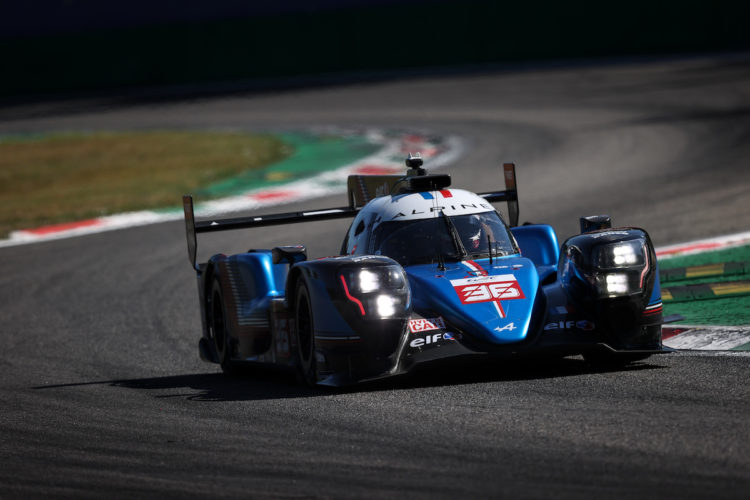 Nicolas Lapierre leads the 6 Hours of Monza in the #36 Alpine, after the initial leader and pace setter #708 Glickenhaus is sidelined by engine issues.

Shortly after the three hour mark, smoke was seen billowing from the engine of the Italian-built, Amnerican-flagged car, which is now 35th overall and out of contention.

Prior to this, the car had to serve a drivethrough penalty for speeding under full course yellow. They were given this penalty at the samer time as Henrique Chaves, who’d just taken a 50 second stop/go penalty for pitlane speeding, lost the car at the second chicane and flipped on a sausage kerb.

The car slid across the track on its roof, ending up on drivers left upside down. A safety car was called and was out for some time while the car was mnoved.

In second is the #8 Toyota GR010, Brendon Hartley catching Lapierre on newer tyres. Third is the other #7 Toyota, Kamui Kobayashi behind the wheel.

The former leader of the race in LMP2, the #22 United Autosports Oreca 07-Gibson was delayed when Philip Hanson, who’d climbed into the car replacing Filipe Albuquerque, experienced a loss of power. The car was later pushed into the pits and repaired, so is back on tracks but laps down.

AF Corse continue to lead GTE-Pro 1-2, with James Calado leading in the #51 Ferrari 488 GTE EVO, 12 seconds ahead of teammate Miguel Molina in the sister #52 Ferrari. Nick Tandy is third in the #64 Corvette C8.R.

In GTE-Am, Mikkel Pedersen leads in the #46 Team Project 1 Porsche 911 RSR, with the #85 Iron Dames Ferrari 488 GTE EVO second, with Rahal Frey behind the wheel. The #46 leads by over 40 seconds, but owes a stop on the Iron dames car, meaning it’s all to play for. In third is the #77 Dempsey-Proton porsche 911 RSR-19 of Harry Tincknell.