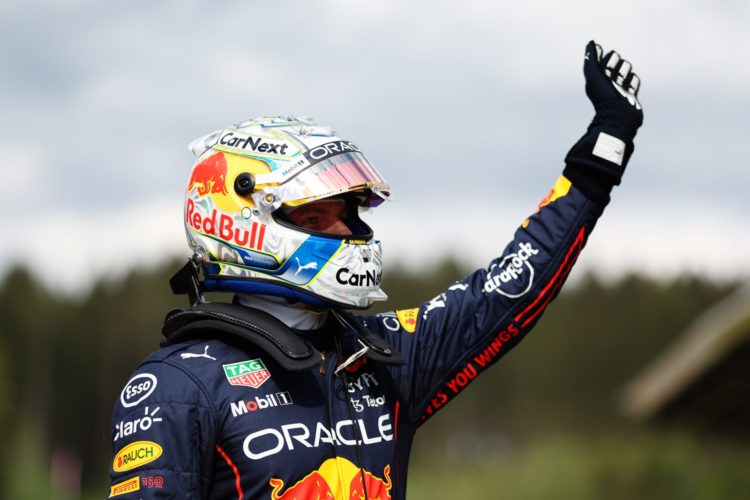 Verstappen swatted away a brief threat from the Ferrari drivers off the line to control the 23-lap encounter and notch up his second Sprint success of 2022, having also led the way at Imola.

Charles Leclerc and Carlos Sainz had a short battle for second spot that was settled in favour of the Monegasque driver as they joined Verstappen in the top three.

The result means Verstappen extends his lead in the Drivers’ Championship to 38 points over team-mate Sergio Perez.

Perez put in a strong charge during the race to recover from his penalised grid spot of 13th to fifth, behind Mercedes’ George Russell.

Esteban Ocon was a strong sixth for Alpine while Kevin Magnussen picked up more points for Haas by taking seventh.

Lewis Hamilton clashed with Pierre Gasly at the start, spinning the AlphaTauri, but stewards deemed no investigation was necessary.

Hamilton was delayed in the incident and spent much of the race hounding Mick Schumacher for eighth before eventually overhauling the Haas driver to pick up the final point.

Schumacher preserved ninth while Valtteri Bottas rounded out the top 10 for Alfa Romeo but will drop to the back of Sunday’s grid owing to his engine penalty.

Lando Norris and Daniel Ricciardo were line astern for McLaren in 11th and 12th respectively, ahead of Lance Stroll and Zhou Guanyu.

Zhou prompted an extra formation lap, knocking one lap from the race distance, after a problem as he tried to roll onto the grid, eventually starting from the pit lane.

Gasly trailed home in 15th place while Alexander Albon was demoted from 13th to 16th after he was judged to have forced Norris off at the start.

Albon was also involved in a clash with Sebastian Vettel through Turn 6 that pitched the Aston Martin driver into a spin through the gravel.

Vettel was brought into the pit lane during the final stages, notionally classifying 19th, behind Yuki Tsunoda and Nicholas Latifi.

Fernando Alonso was a non-starter for Alpine after a problem was detected prior to the formation lap.

Alonso was wheeled into the pit lane before being moved to the garage, and into retirement, meaning he will start Sunday’s race from 19th place.