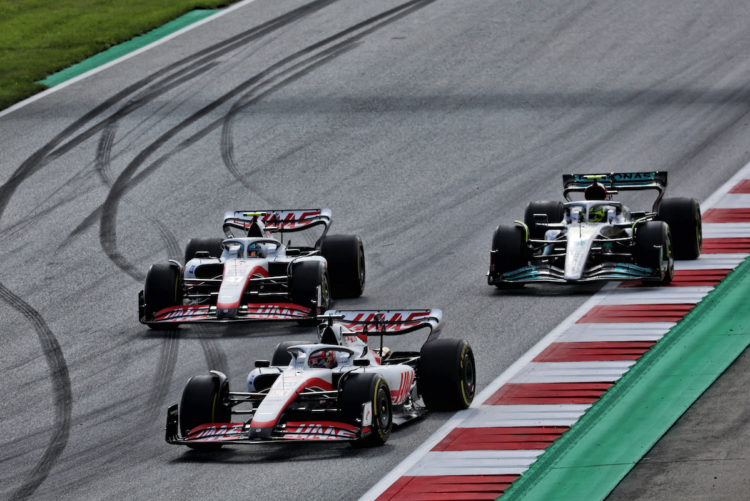 Mick Schumacher was left to rue a ninth place finishing position outside of the points during the F1 Sprint on Saturday, believing the Haas team could’ve done more to bring home a stronger result.

In the early stages of the race, Schumacher was running in seventh place behind team-mate Kevin Magnussen, however roughly halfway through, they were both overtaken by Red Bull’s Sergio Perez.

Mercedes’ Lewis Hamilton then closed up to the back of Schumacher, but the seven-time World Champion struggled to get past.

Schumacher made use of his Drag Reduction System behind Magnussen to stay ahead of Hamilton for several laps, having been told he was to hold position behind the Dane.

After Schumacher dropped outside of the one-second DRS window, he was overtaken by Hamilton, and missed out on a solitary point.

“I think the fight with Lewis was quite fun,” Schumacher said. “I think it was surprising to see that we were able to fight in that moment, and the Red Bull behind us wasn’t massively quicker.

“It was a nice feeling. I think that we could’ve had points today but for some reason or another we weren’t allowed to do that. So it’s something to be discussed.

“We were told to keep position, even though I felt I was quicker. We have to have a look.”

During the race, Schumacher requested over team radio that Magnussen slow down to ensure that he had DRS to stay in front of Hamilton.

Magnussen asserts that he was more than happy to comply with the request, but says the message was relayed to him too late in the race.

“We didn’t look so strong this morning, I got a bit nervous about our pace,” Magnussen reflected.

“We made some changes, of course there’s a limited amount of changes you can with the cars being in parc ferme. But it seemed to straighten it up and get the pace back.

“Mick could’ve held Lewis [behind], it looked like it was pretty consistently impossible for Lewis to get past him when he had DRS.

“He lost DRS at the end and [Lewis] got past because of that. The team asked me to slow down to give Mick DRS.

“But it was the next lap that they asked me to do that that he got overtaken. It’s not that I didn’t want to help out, it’s just it happened in a bit of a rush.”