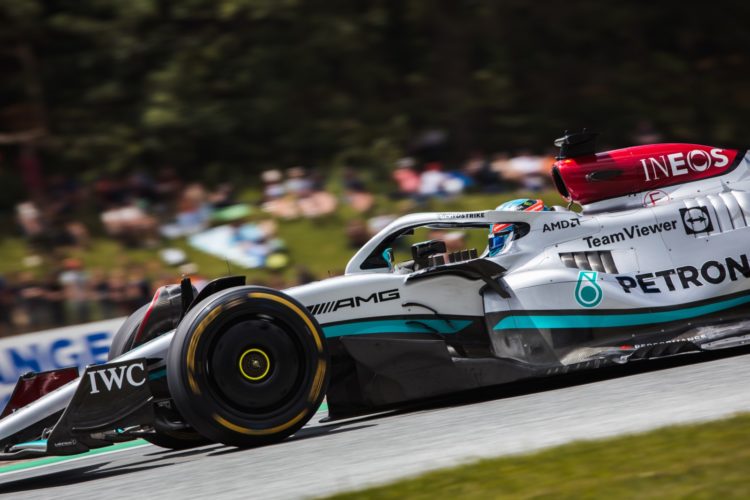 George Russell says Mercedes was slower than it expected in Formula 1 Sprint in Austria while Lewis Hamilton was “grateful to survive” a frantic start.

Russell converted his grid position of fourth after 23 laps of racing but finished 13 seconds behind winner Max Verstappen, and was seven seconds down on third-placed Carlos Sainz.

“First, thank you to everyone in the garage to get the car ready today,” said Russell. “It was a huge team effort, so it was good to get points on the board.

“As for the performance, the gap was more than we were expecting. We were 13 seconds behind after 23 laps, so that’s nearly half a second per lap.

“We need to work overnight to understand why we dropped off the pace.

“Small things can make a difference – the tyres weren’t easy to manage, and different approaches to downforce levels will play a part tomorrow. But we are in no doubt that we’ve got work to do.”

Hamilton went on to classify eighth after dropping back at the start following contract with Pierre Gasly.

“I’m grateful I managed to survive out there today,” he said. “The team did such a great job to get the car back together last night and this morning. A big thank you to them and I’m glad I brought it back mostly in one piece.

“I didn’t have a good start, then Pierre moved across on me at Turn 1. I don’t understand why drivers do that when there’s so much space to the right, and I couldn’t do anything about it. Then the same happened in Turn Three with a Williams and Red Bull. I got some sort of damage, but at least could continue.

“After that, I was just trying to catch up. We are slower on the straights, so I had to wait until I was out of the DRS train to overtake the cars in front. That’s why it took a few laps to get ahead of Mick [Schumacher].”