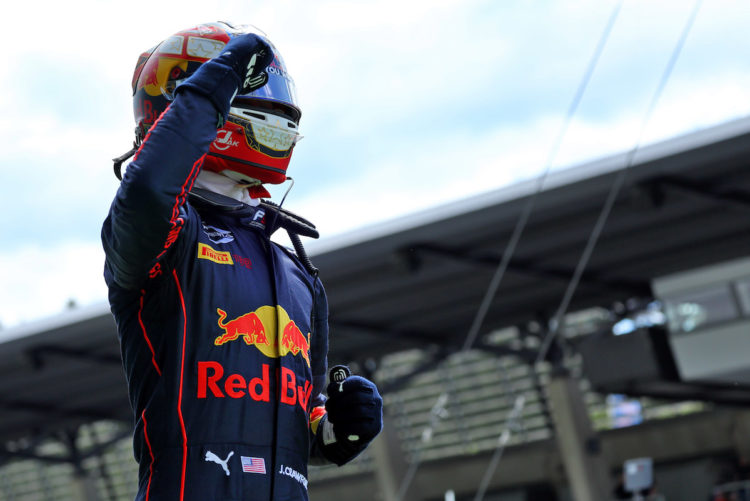 In his second year of racing in the FIA Formula 3 Championship, Jak Crawford took his first win in the series, fending off Caio Collet in the final laps of the race.

Collet was leading for much of the race, after starting from reverse grid pole position. However, he found himself dropping behind Juan Manuel Correa on the opening lap.

But on lap six, Correa was hit with a terminal issue and was forced to retire from the race.

A Safety Car was called midway through the race when Zane Maloney was spun around amid a battle with his rivals, and at the restart, Crawford pounced.

He moved ahead of Collet with an impressive overtake around the outside of Turn 7 to consolidate his position at the head of the pack. In the final laps, Collet ran close behind the PREMA Racing driver, but couldn’t produce an overtake to reclaim the lead.

The win marked PREMA’s second of the 2022 campaign, with Crawford becoming the seventh different race winner of the year.

Collet was just over half a second behind to take a podium result, while Franco Colapinto rounded out the top three.

Arthur Leclerc was fourth and took the extra point on offer for the fastest lap – all three PREMA cars were on course to score points, however Oliver Bearman received a five-second time penalty and was demoted outside the top 10.

Roman Stanek was fifth, ahead of Kaylen Frederick in sixth. Having missed a handful of rounds due to illness, Jonny Edgar’s F3 return was greeted with a strong drive to seventh place.

Championship leader Victor Martins was eighth, with Leclerc closing in behind for the lead of the standings.

Alexander Smolyar and Isack Hadjar rounded out the top 10.