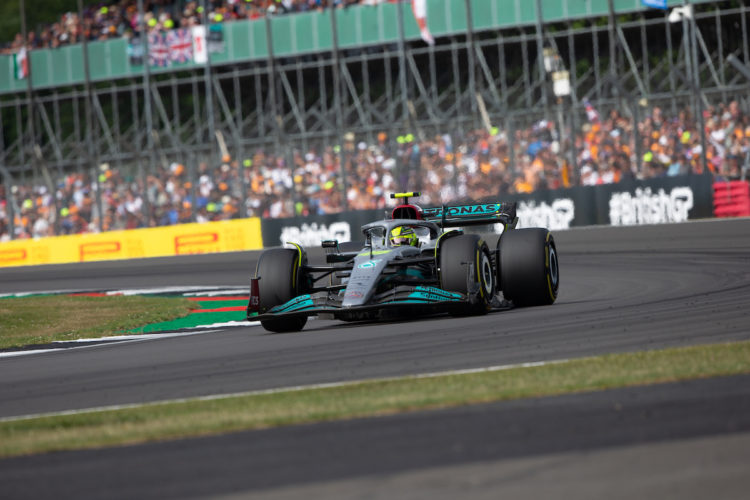 Mercedes says that it is “not quite quick enough” to challenge for race wins despite its encouraging pace at the British Grand Prix last weekend.

Lewis Hamilton finished third in the grand prix, but looked to have stronger pace than the two Ferrari cars, who were out in front for much of the race.

Mercedes has endured a difficult start to the 2022 campaign, and is still awaiting its first win of the season.

The team introduced upgrades at Silverstone last week, which operated without any unexpected issues.

Mercedes has suffered from high-speed bouncing throughout the first half of the year, but the smoother Silverstone track surface, as well as the new parts, aided its performance.

However, the team isn’t expecting to have similar pace at all tracks going forward.

“Lewis’ pace was matching the Ferraris and indeed at times he was a little bit quicker which was really encouraging to see,” said Andrew Shovlin, Mercedes’ Trackside Engineering Director.

“But was this down to the fact that we could run the car down closer to the ground, was it that the track is a lot smoother at Silverstone, or the updates?

“Well, the reality in terms of how we were running the car, that was quite normal for ride heights and everything but it is a smooth circuit and while we are working to make sure that our car works well on bumpy tracks, we’ve still got a bit to do there.

“So, no doubt the smooth track helped a bit towards that performance and then also yes, the updates did play a part and that was encouraging to see because that’s the bit that we will carry into the next race, the race beyond.

“We need to build on this performance because we know that we are not quite quick enough just yet”.

Toward the end of the race, Hamilton was catching Charles Leclerc and Carlos Sainz before a Safety Car neutralised the race.

Shovlin says that Mercedes is confident that without the intervention, Hamilton would’ve passed Sainz for second, while Leclerc’s position in the lead was more of a question mark.

“Looking at his pace, looking at the gap to Carlos, we are pretty confident he would have been able to catch him and pass on track,” he said.

“The bigger question is Charles was a bit further up the road and in a slightly quicker car, so whether he would have been able to catch him, we don’t know.

“The reality is we would have to see that play out on track to know what the real answer is.”