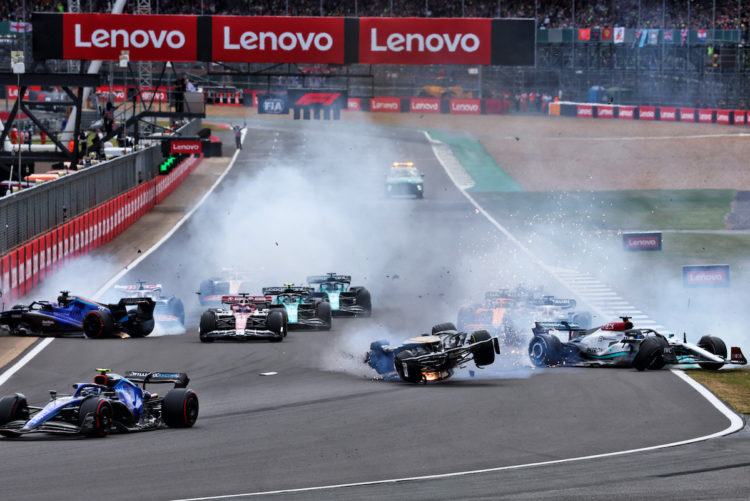 Carlos Sainz has revealed that he opted not to watch replays of Zhou Guanyu’s crash during the red flag stoppage on Sunday.

Zhou’s car was flipped upside down and launched over the tyre barrier on the opening lap of Sunday’s grand prix after he made contact with Mercedes’ George Russell.

Race Control deployed the red flag immediately, with those who escaped the incident with non-terminal damage returned to the pit lane.

Zhou was extracted from the car and received the all-clear from doctors, with the live broadcast showing replays of the shunt once word came through that the Chinese driver had suffered no serious injuries.

But Sainz says he didn’t look at the replays as he waited for the race to restart.

“I took the decision not to see the accident,” he said. “When a red flag happened I knew there must have been a big shunt for the red flag.

“But I didn’t watch the TVs. Obviously, I was incredibly happy to see Zhou coming out of the car without major issues. And then when I saw it now on the podium, I was completely shocked.

Sainz hailed the FIA, the governing body of Formula 1, for the safety improvements that have been implemented into the sport in recent years.

“You know, we sometimes criticise the FIA, but in these cases you need to give it to them how much they’ve been helping us,” Sainz said.

“And if you see the crash this morning in F2 [between Dennis Hauger and Roy Nissany], what happened with the Halo, today, they’ve saved probably two lives.

“We need to give them give it to them, the amazing work they are doing in safety.

“I feel so happy you know to be racing in Formula 1 in an era where we are pushing each other at higher than 300 kph like you saw today, racing.

“You guys cannot imagine the speeds we’re doing in the high speed and taking directions, fighting for position, and knowing that you can do that safely, or within a safety window.

“And I thank them for this, because I just feel it’s great to do it. And I love this sport for that.”