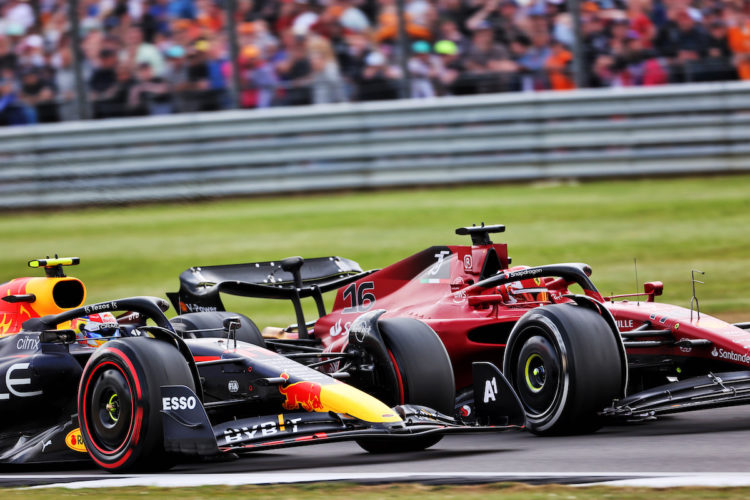 Sergio Perez says he was reminded of his days of racing in the junior categories during his late-race fight with rivals during the British Grand Prix.

Perez was involved in a fierce podium battle with Charles Leclerc and Lewis Hamilton in the final laps of the race following a Safety Car restart.

The Mexican driver was brought back into contention after dropping to the rear of the field early on when he pitted to replace his damaged front wing.

Perez crossed the line in second place after producing a robust attack on his competitors, and avoided an investigation when his racing conduct was noted by the stewards.

“It was getting difficult towards the end of the stint [before the Safety Car],” Perez said. “But keeping that pace, trying to open a bit of a window… I was fighting Fernando [Alonso] and Lando [Norris], trying to get the window on them.

“And then when the Safety Car came out, it meant that we were in P4. So then it was a good chance.

“And then it was epic final laps. Those laps really remind me of the junior series, you know, when we were all racing and having a lot of fun.”

Perez believes that his battles were a “good test” for the new-for-2022 cars, which were designed with the hope of allowing for closer on-track battles.

“I think it was great, the level of racing we were able to do across the grid,” he said. “Lewis and myself were obviously with same tyre age [at the end].

“Charles was struggling a bit for grip, but it still was a very good fight. It really felt like we were able to race each other hard.

“We were able to follow each other through the high speeds.  Even when I overtook Lewis he got me back because he could stay literally next to me, so it was really very good racing.

“And I think certainly this is a good test for this generation of cars, where we are able to follow each other.

“Although you lose a position you can get it back by keep fighting the other car, so I think it was great what we’ve seen today in terms of these regulations.”