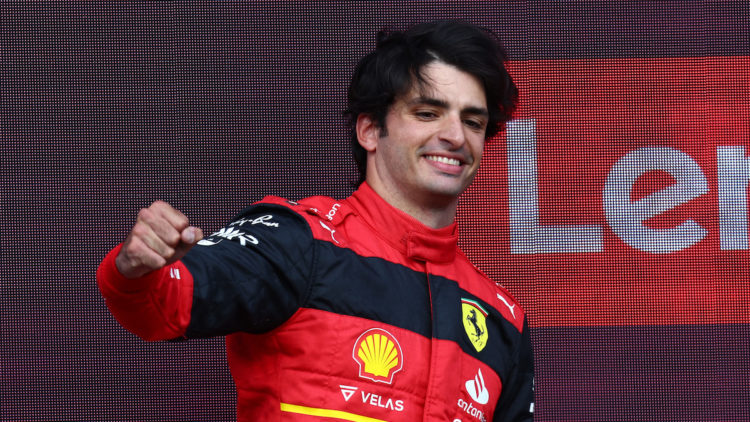 Sainz started the race from pole position, however the red flag was deployed moments into the grand prix following a multi-car crash that saw Zhou Guanyu flip over and hit the catch fencing.

Zhou was examined at the medical centre, but was released from the facility after getting the all-clear from doctors.

After a delay of one hour, the race resumed, with Sainz holding his lead off the line – however a mistake at the Maggotts and Becketts complex several laps into the race saw Max Verstappen moved ahead for the lead.

Verstappen soon dropped behind again as he was forced to pit after complaining about a lack of grip, which turned out to be rear body damage that hindered the remainder of his race.

Leclerc closed up to the rear of Sainz, while Lewis Hamilton ate into the gap to the Ferrari duo.

Sainz was the first to pit, and was ordered to drop behind Leclerc after the Monegasque driver made his own pit stop.

As the race approached its final stages, Esteban Ocon parked his car on the track which caused a Safety Car, turning the grand prix on its head.

Leclerc stayed out on his Hard tyres, while Sainz and Hamilton pitted for Softs in second and third respectively. Sergio Perez then also became a factor, after he progressed through the field after pitting for a fresh front wing early on in the race.

Perez, Hamilton and Leclerc were involved in several intense wheel-to-wheel battles, with the positions changing on multiple occasions after the restart.

However, it was Perez who prevailed in second place, while Hamilton took a podium result at his home grand prix. Team-mate Russell failed to finish the race, as the Briton, as well as AlphaTauri’s Pierre Gasly and Williams’ Alexander Albon, retired in the opening lap collision.

Leclerc had to settle for fourth, fending off Fernando Alonso who crossed the line in fifth place.

Lando Norris was sixth, having lost a the position to Alonso after making a late call to pit for Soft tyres during the Safety Car.

Verstappen’s injured car limped home in seventh place, ahead of Mick Schumacher, who collected the first points of his Formula 1 career.

It was a strong day for Haas, as Kevin Magnussen also bagged a solitary point in 10th, crossing the line behind the Aston Martin car of Sebastian Vettel.

Valtteri Bottas was the other retiree from the race, as he parked his car in the pit lane with a mechanical problem.