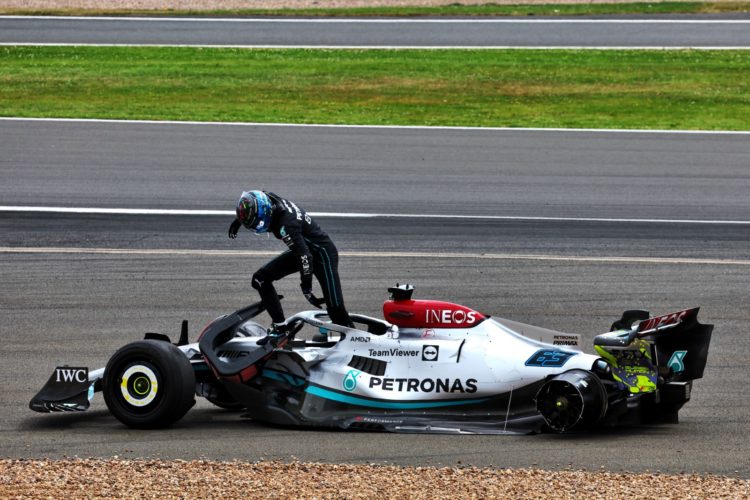 George Russell expressed frustration at having his British Grand Prix ended after one corner due to marshals removing his stricken Mercedes.

Russell was involved in a frightening accident on the run to Abbey on the opening lap after he tipped Zhou Guanyu into a flip having been hit by Pierre Gasly.

Russell extricated himself from his Mercedes and dashed to check on Zhou after the Alfa Romeo ended up in the fence, having vaulted the tyre barrier.

Russell was unable to restart his W13 and returned to the pits in a bid to seek advice from Mercedes, but by the time he had done so his car had been touched by marshals – meaning he had received outside assistance.

As this is outside Formula 1’s regulations Russell was not able to continue in the race.

“We started on the Hard tyre because I made a mistake in qualifying and we thought that risk gave us the best opportunity later in the race but there was just very little grip at the start,” said Russell.

“It’s the hardest compound, it’s cold out there and I got swamped by all the cars. Next thing I know I got touched, I was in the side of Zhou, and that was it.

“I jumped out the car to see if Zhou was okay and I saw it was red flagged straight away but when I came back to the car, I couldn’t quite get it started for whatever reason, so I ran back to the team to check.

“I asked the marshals to leave the car and next thing, when I got back, the car was on the back of the flatbed which meant I couldn’t restart.

“It was obviously frustrating for my race because the car just had the puncture and there’s no doubt we had the pace to come back to P6 today but I’m just glad that Zhou was OK.”

Team boss Toto Wolff added: “It was disappointing for George not to be in the race because the car pace was good but that’s the regulation so it is what it is, unfortunately.”