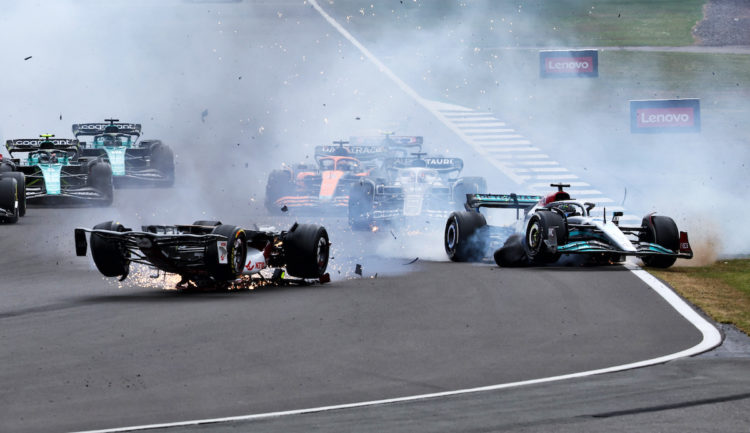 The British Grand Prix was red-flagged just several corners into the race, after a number of cars were involved in a collision.

As the cars approached the opening corner, Pierre Gasly was lodged between Zhou Guanyu on his left and George Russell on his right.

Gasly and Russell made contact, with Russell’s car spinning around and flipping Zhou’s car over, before the Alfa Romeo challenger slid into the gravel.

The car then bounced over the tyre barrier and hit the catch fencing.

Esteban Ocon and Alexander Albon were also involved in the incident, with the second AlphaTauri car of Yuki Tsunoda picking up damage in the shunt.

TV cameras stayed away from the scene of Zhou’s accident, however an update from the FIA confirmed that the Chinese driver is alert. He was taken to the medical centre, as was Albon.

“The FIA advises that following the incident at the start of the race, emergency crews were immediately in attendance, and the drivers of Car 23 (Albon) and Car 24 (Zhou) have been taken to the medical centre,” read an FIA statement.

“Both drivers were conscious and will be evaluated at the medical centre. Further updates will be given in due course.”